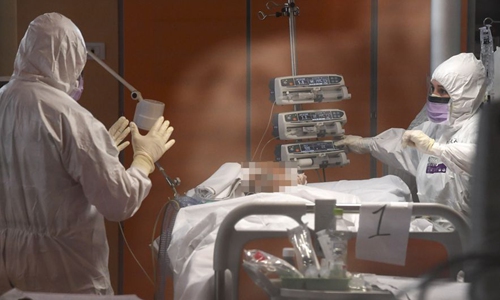 Overseas demand for body bags, coffins and urns has jumped. From March 27 to April 25, the top three overseas markets for Chinese-made funeral service supplies were the US, Mexico and Italy, Alibaba.com told the Global Times on Monday.

Tian Xianzhi, a manager with Jiesen Trade Co, a large supplier of funeral items including coffins and body bags, said that he had been in the industry for 15 years and never saw such a surge in export demand.

"The enquiries from abroad have increased about 10 times and actual orders rose by three or even five times, but we're limited by our production capacity at the moment," Tian said, adding that the major destinations are the US and  European countries.

The total confirmed deaths rose to 207,270, according to updates by Johns Hopkins as of press time.

Despite adjustment of shipments and expansion of production, other issues such as rising costs of raw materials and technical bottlenecks now affect Tian's company. Non-woven fabrics, a major material for making body bags, are also used in masks and protective suits. The fabrics are becoming expensive and scarce.

"We are three months behind in our orders for body bags," Tian said.

The same issue applies to coffin-making, as a coffin involves sculpturing techniques that often take skillful workers 30 days to make, a production process that cannot be accelerated in a short time.

"In addition to the production process, delivery and customs clearance will take another two months, which means a three-month wait for clients to get the goods," Tian said, adding that the company is no longer taking orders.

Tian's company has exported more to European countries than to the US recently due to the additional 25 percent tariffs on Chinese exports to the US, including funeral supplies.

A manager surnamed Wang with Share Group, a large producer of funeral supplies including urns, coffins and wreaths, based in Fujian Province, told the Global Times that the company invested tens of millions of yuan to expand production partially due to world demand.

"The foreign orders that we have received are 20 percent higher than in the same period last year," Wang said.

Shipping costs are also three to five times higher than before the outbreak.

A business manager surnamed Liu from a manufacturing and trading company in Qingdao, East China's Shandong Province, told the Global Times on Monday that it cost 30 yuan to ship 1 kilogram of body bags from China to Europe before the outbreak, but now it costs about 100 yuan.

To lower shipping costs, Liu's company upgraded the product to cut its weight by two-thirds and make it waterproof, while keeping the price unchanged.

Not all sectors have seen rising demand amid the COVID-19 outbreak.

Wang Chuanyou, a manager at a Quanyou tombstone processing factory, told the Global Times that the company used to export tombstones to the US, Canada, UK and Russia, but now there are few orders coming in.

"To my knowledge, the reason for the decline is that as the local epidemic continues, many funerals have been canceled or put on hold, so orders are down two-thirds compared with the same period last year," Wang said, adding that as the outbreak abates abroad, exports should increase.