BUSINESS Chinese products to the rescue amid pandemic

Chinese products to the rescue amid pandemic 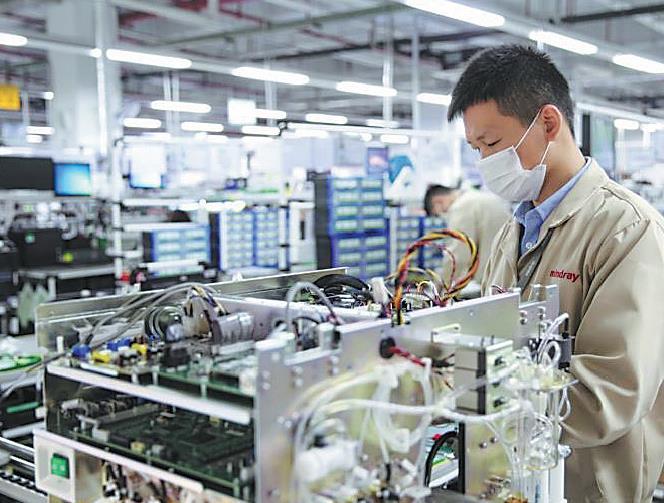 Amid rapidly surging global demand for ventilators, Chinese medical equipment manufacturers are striving to overcome all difficulties to produce these products and others to help the world combat the COVID-19 pandemic.

Ventilators help people breathe when they are unable to do so on their own. Very often, the medical devices can make the difference between life and death for patients.

Despite the fact that global demand for ventilators has been skyrocketing, boosting production capacity and exporting them to the world is not as simple as it sounds.

Li Kai, an industry expert, said demand for ventilators before the coronavirus pandemic was not particularly high, with the products normally used in intensive care units of hospitals. However, due to the current surging demand among desperate countries fighting the pandemic, ventilator manufacturers have been working frantically to increase production capacity.

However, he noted that unlike surgical masks, ventilator production needs to go through a much more involved process.

Yuan Zhen, deputy general manager of Jiangsu Yuyue Medical Equipment & Supply Co Ltd, noted that the production of a ventilator involves more than 500 components, and some key parts－such as chips and sensors－must first be imported.

Yuan said that as the efficiency of the global supply chain has been affected by the pandemic, in order to guarantee future production, the company had already set aside a certain quantity of imported parts in advance. It had also gotten in touch with domestic enterprises to look for alternative components.

Currently, the company has received ventilator orders from 58 countries. Through constantly enlarging production capacity, the company will continue to contribute to the world's fight against the pandemic, he added.

Mindray, a medical equipment manufacturer based in Shenzhen, Guangdong province, said it received an increasing number of overseas ventilator orders since mid-February, mainly from the Asia-Pacific region. Later on in early March, as the pandemic began ravaging Europe, orders from countries on that continent skyrocketed.

May Li, a senior executive at Mindray, said that tens of thousands of ventilators, monitors and ultrasonic machines are being exported to around the world in an orderly manner. An order of nearly 10,000 pieces of medical equipment from Italy has already been shipped and the entire order is expected to be completed by mid-April.

Li said that in early April, an emergency procurement order from the United Kingdom arrived. Having received an Emergency Use Authorization recently issued by the United States Food and Drug Administration, orders from the US are expected to come in soon.

Speaking of the pandemic's influence on its global supply chain, Li said that "some of our raw materials come from overseas markets, which we have already sourced, and we have also found alternatives".

Mindray said that when the global cargo transportation routes were blocked as novel coronavirus spread across the world, it actively communicated and cooperated with related logistics firms and worked out alternative transportation solutions so that its ventilators could be delivered to contagion-stricken regions in a timely manner.

Industry experts noted that during the severe acute respiratory syndrome epidemic in 2003, Chinese-made ventilators made up only a small share of the market, and the country mainly relied on imported ventilators to make up for the supply gap. Today, Chinese enterprises completed the transformation from "Made in China" to "Created in China", turning the country into a driving force in the industry.