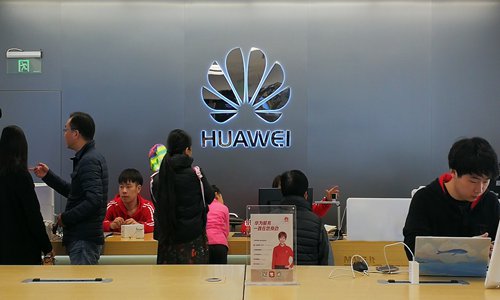 Chinese smartphone manufacturers wrapped up 2017 on a strong note, capturing three of the top spots on International Data Corp's (IDC) Top Five Smartphone Company list and substantially outpacing dominant global players in shipment growth.The fast growth of shipments by Huawei Technologies Co, OPPO Electronics Corp and Xiaomi Inc in 2017, when the total global smartphone market saw declines in shipments, can be attributed to the companies' overseas expansion in countries such as India as well as improvements in the quality and technology levels of their handsets, two Chinese experts said on Sunday.While South Korea's Samsung Electronics Co and US-based Apple Inc took the top two spots on IDC's Top Five Smartphone Company list for 2017, released on Sunday, the three Chinese vendors - Huawei, OPPO and Xiaomi - took the rest of the top five spots.Wang Yanhui, head of the Shanghai-based Mobile China Alliance, said that while the ranking is "quite normal," with the five top brands continuing to dominate the global market, the rise of Chinese vendors in terms of shipment growth is significant.Huawei shipments surged 9.9 percent year-on-year to 153.1 million units in 2017, while OPPO's rose 12 percent to 111.8 million and Xiaomi's jumped 74.5 percent to 92.4 million, according to IDC. Meanwhile, Samsung's shipments grew 1.9 percent to 317.3 million and Apple's shipments rose just 0.2 percent to 215.8 million, it said."With the Chinese smartphone sector maturing in recent years, Chinese smartphone manufacturers have focused on overseas markets and they have had great successes in markets such as India. These successes have really helped Chinese brands," Wang told the Global Times.Wang said that after its aggressive effort to expand its presence in India, including launching its newest handset, adding local partners and bringing Bollywood stars in to the marketing campaign, Xiaomi beat Samsung as the top smartphone brand in India in the fourth quarter of 2017.In the quarter, Xiaomi shipped 8.2 million smartphones, compared with Samsung's 7.3 million, and Xiaomi commanded 27 percent of India's market, compared with Samsung's 25 percent, according to a report released by market analyst firm Canalys on January 24.In the same quarter, three other Chinese vendors - Vivo, OPPO and Lenovo - also made it into the top five best-selling brands in the Indian market, which grew 6 percent year-on-year to about 30 million units, the report said.Apart from the Indian market, top Chinese smartphone vendors have also seen significant growth in markets including Southeast Asia, East Europe, Africa and Latin America, according to Xiang Ligang, chief executive of domestic telecom industry new site cctime.com."Traditional big smartphone markets such as China and the US are mature, so to compete in an increasingly competitive global market, smartphone manufacturers have to focus on expanding in Asia, Africa and Latin America because that's what will drive shipment growth going forward," Xiang told the Global Times on Sunday. "So far, we have seen some success resulting from Chinese vendors' efforts in these regions." Behind Chinese smartphone makers' overseas gains are increasingly improved handsets both in technology and affordability, while foreign brands such as Apple have been slow in terms of product innovation, Xiang said."It's very simple: the vast majority of consumers around the world want good-quality, innovative products at relatively lower prices. Chinese companies like Xiaomi and OPPO are increasingly good at bringing such products to the market, while other companies such as Apple have been slow to upgrade their products despite charging high prices," he said.After weaker-than-expected demand for its most expensive iPhone, Apple is cutting orders for some components for the iPhone X and such orders could "reach zero in the second half of this year," Business Korea reported on Friday, suggesting that production of iPhone X could be stopped. Xiang said despite recent slowdowns, Apple and Samsung will continue to dominate the global smartphone market in the short term, but Chinese companies are catching up fast.