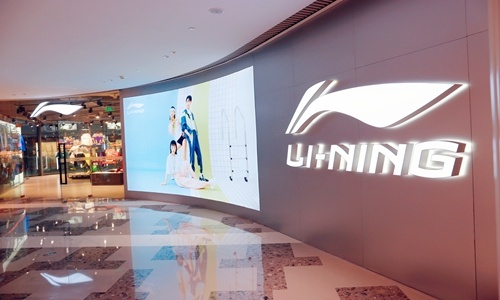 Chinese trade experts and analysts said that the good financial results of Li-Ning and other Chinese brands showed the West's smearing campaign against Xinjiang cotton and its vile intention to contain the global rise of China's textile industry have been thwarted.

Li-Ning predicted that its first-half net profit will jump 163 percent year-on-year to no less than 1.8 billion yuan ($278 million), which easily beat market expectations.

Li-Ning is just one of a group of Chinese domestic brands posting a sales and profits bonanza. Anta Sports Products posted an increase of 35-40 percent annual increase for the first half of this year in a preliminary report, and 361 Degrees predicted that its earnings will rise 30 percent year-on-year in the six months ending in June.

The rise of Chinese sportswear brands comes amid a loss of prestige for Western brands, which used to dominate the Chinese market.

German sportswear Adidas said that second-quarter revenue for the region, including the Chinese mainland, Hong Kong and Taiwan, fell 16 percent year-on-year, the only region to show a decline, according to media reports.

And, Nike's sales in greater China for its second quarter, at $1.93 billion, also missed analysts' expectations of $2.25 billion.

Although leading Chinese sportswear companies were on the rise in both the domestic and overseas markets before the BCI labeling, foreign brands' behavior during the incident as well as the US' crackdown on products from Xinjiang, also helped Chinese brands to report better results, analysts said.

According to data from iiMedia Research, sales of Chinese homegrown brands were particularly strong in the first six months of 2021, with an annual growth rate of 41.6 percent.

More importantly, the expansion in sales was coupled with sharp growth in profitability, with an average annual profit growth rate of 65.3 percent for leading Chinese brands.

"Compared with the stellar growth posted by Chinese sportswear brands, the performances of overseas brands have been mediocre in the Chinese market," Zhang Yi, CEO of iiMedia Research Institute, told the Global Times on Thursday.

"The rise of domestic sportswear brands have showed that the US attempt to check the development of the Chinese textile industry has failed," Zhang said.

Analysts said that the rise of domestic sportswear brands is underpinned by China's strong textile industry, unlike the smartphone industry, which faces bottleneck problems such as the inability to manufacture high-end chips. The trend is also supported by the government policy that emphasizes the "dual circulation" development pattern, which rebalances China's economy away from an overreliance on external demand.

Sales of textile products including garments, shoes and other items accounts for a significant share of China's retail sales. For the first six months of this year, that figure reached 673.8 billion yuan ($104 billion), up 33.7 percent, data from the National Bureau of Statistics showed.

Younger Chinese consumers are very different from their older peers, and their preference for domestic brands plays a vital role in the market, analysts pointed out. A strong sense of national pride in Chinese brands from domestic consumers is manifesting itself, particularly for products such as sportswear, cosmetics, mobile phones and electric vehicles, according to a report by financial services firm Credit Suisse in May.

Tian Guangqiang, assistant research fellow with the National Institute of International Strategy at the Chinese Academy of Social Sciences, told the Global Times on Thursday that Chinese companies have made remarkable progress in upgrading the quality of their products, and they are very flexible about market demand. They also enjoy a cost advantage over their foreign counterparts, as China has the whole industry chain for textiles.

"However, it must be noted that some foreign brands have taken an unethical stance as some in the West politicize trade. This has spurred disgust and boycotts among Chinese consumers," Tian said.

Earlier this year, H&M's refusal to use Xinjiang cotton subjected the brand to a widespread consumer boycott, and the company's China sales plunged 28 percent in the second quarter.

Tian said as China rebalances its growth model, Chinese leading sportswear companies will continue to benefit from a strong domestic market and other emerging markets.

Western brands suffered due to their blind following of ill-intentioned politicians in the US in their efforts to denigrate China's key industry with fabricated lies.

"Firms are only seeing the tip of the iceberg for future losses, should they go down the wrong path," Zhang said.