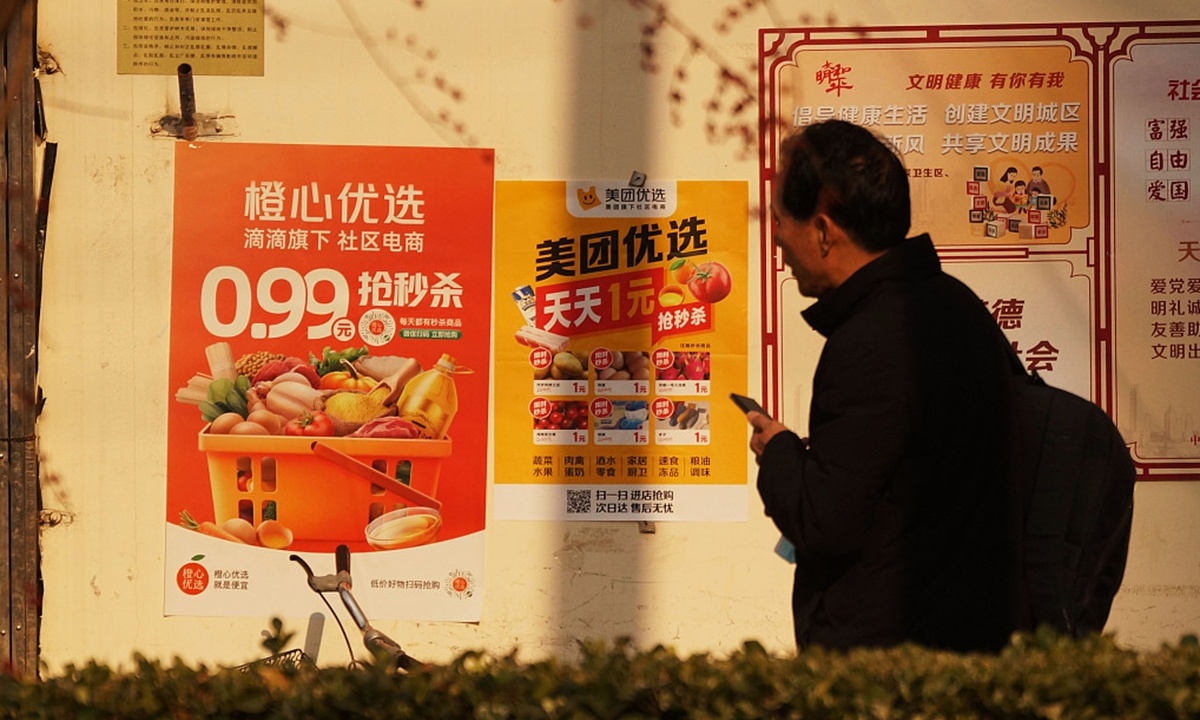 A resident in Tianjin checks posters of community group buying on e-commerce platforms on December 9, 2020. Photo:CFP

As the global pandemic alters consumption behavior, community group buying seems to be the next investment opportunity with the greatest return in China and has attracted China's leading internet companies including Alibaba, Tencent and Pinduoduo.

However, the new business model recently has caused much criticism for its unhealthy competition with lower prices and large internet companies' rush for cash instead of genuine technological innovation.

There were nine fund-raising rounds which took place in the community group buying sector this year by the end of November, raising a total of 3.36 billion yuan ($513 million), according to industry website 100ec.cn.

Aside from start-ups such as Xingshengyouxuan and Nicetuan.net that obtained massive investment from leading internet companies Alibaba and Tencent, large internet firms are also building their own platforms, for example Pinduoduo's Duoduo Maicai (Pinduoduo Vegetable buying).

Dubbed as the 'community groups', the new business model allows a group of residents who live in the same apartment compound to get discounts by purchasing together in bulk. Under this model, e-commerce platforms recruit a leader salesperson assigned to a community, who is responsible for posting product links for residents of their community through a WeChat group. Residents can place orders via these links.

Industry observers said that the business model itself is a trend but expressed concerns over malignant competition from large internet companies that burn money earned from monopolies in other sectors. The model has also been attacked for failing to use technology to create any new real value or convenience for consumers.

"Different from purchasing products from a shopping mall or supermarket, the new business model only means more logics fees and commission for the sales staff and therefore the prices are relatively cheaper," Lu Zhenwang, founder of Shanghai Wanqing Commerce Consulting, told the Global Times on Sunday.

Liu Dingding, a Beijing-based internet market watcher, told the Global Times on Sunday that entering into community group buying market is a strategy that can help internet companies take the offensive or defensive, as they can gain large profit if successful or at minimum develop new users at a low cost.

However, the industry faces a contract-fulfilling crisis, he said. "As these internet companies' supply chain capacity can't catch up with the crazy expansion of the number of community salespeople, resulting in a common situation that residents don't receive the goods they bought," he said.

A notice of Cangzhou Huahaishunda Food Co, based in North China's Hebei Province, circulated online on Saturday, asking its dealers not to supply community group buying platforms including Duoduo Maicai and Meituan Youxuan.

"We recently received several complaints about serious low prices on community group buying platforms such as Duoduo Maicai and Meituan Youxuan, with some prices far lower than ex-factory price. This has an extremely negative impact and damages our clients' interests," read the notice. It requires that the prices of the company's products sold on these platforms be no lower than retail prices.

Qian Qinghua, chairman of the food company, confirmed the notice's content with the Global Times on Sunday. He said that apart from his company, many other food brands such as domestic snack maker Weilong have also noticed dealers to stop cooperation to community group buying platforms.

He pointed out that to fight for community group buying market, these platforms burn a large sum of money. For example, they may purchase goods from wholesalers for 20 yuan but then sell to consumers for 15 yuan, with some even lower at 1 yuan, he said.

Lu pointed out that Chinese internet companies are mainly distributed in e-commerce, fin-tech and social networking sectors, while their presence in high-tech sector is only cloud computing.

He said leaders of domestic internet firms should nurture sense of innovation and invest in emerging technology in a bid to contribute to China's goal of developing into a high-tech country. "This is a task the easiest for them compared with other types of enterprises," he said.

The People's Daily published an editorial on Friday, criticizing domestic internet giants for being overly focused on quick success by obsessing over monetizing their large user base rather than invest in sci-tech innovation to gain greater benefits brought on by technological innovation.

"The US has constantly sanctioned Chinese tech companies from the beginning of this year, and it has become a concern for the nation to make breakthroughs in stranglehold and key areas," read the editorial.

With internet giants possessing large cash reserves, data resources and advanced digital technology, people expect that these companies can not only make innovations in business but do more in shouldering the responsibility in promoting sci-tech innovation, it continued, noting that this is enterprises' social responsibility.

The country's regulation of internet companies tightened following their latest round of explosive growth amid the global pandemic.

The State Administration of Market Regulation unveiled regulations to root out industry monopoly, with 27 companies including Alibaba, Tencent and JD.com reportedly on the list.

On Friday, a meeting of the Political Bureau of the Communist Party of China Central Committee further stressed enhancing the strategically important role of science and technology, while also calling for strengthened antitrust efforts and the prevention of unhealthy expansion of capital.

Observers noted that the country will continue to provide a relatively relaxed environment for the development of new technologies but will likely strengthen supervision of new areas of the economy such as the digital economy to prevent potential risks.