BUSINESS Chinese tourists reluctant to visit US amid trade spat

Chinese tourists reluctant to visit US amid trade spat 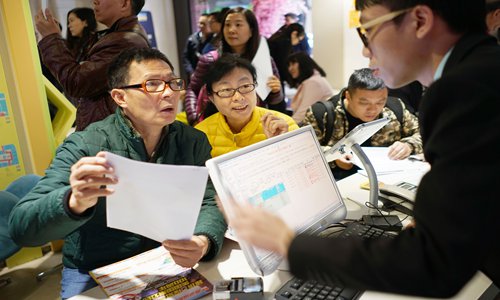 Tourists in Guangzhou, capital of South China's Guangdong Province, book trips to the US in 2016. File (photo: IC)

Chinese tourists' interest in traveling to the US has withered as peak vacation season approaches amid escalating trade tensions between the two countries, industry data and analysts suggested on Wednesday. And domestic tourists might turn to Europe and Russia instead, which analysts said could hurt the US hospitality, catering and other tourism-related industries.

Data provided by online travel platform Mafengwo.com to the Global Times on Wednesday showed that in the first half of 2018, search popularity for once popular US cities, including Los Angeles, New York, San Francisco, Las Vegas and Boston, showed a decline in July, traditionally a peak season for US tourism.

Meanwhile, Chinese tourists showed increasing interest in cities in Russia and some European countries. For example, Moscow was up 78 percent in popularity, while Nice in France was up by 31 percent, Mafengwo data showed.

Jiang Yiyi, director of international tourism development at the Beijing-based China Tourism Academy, told the Global Times on Wednesday that though the number of Chinese tourists is not the highest among foreign tourists in the US, "our purchasing power definitely ranks among the top of the list."

According to a report from the US Travel Association, China was the third-largest overseas inbound travel market to the US in 2016. US travel exports to China (spending by Chinese visitors and students in the US, and on US airlines) reached $33.2 billion in 2016, significantly higher than any other country. Average spending per Chinese visitor was $6,900 in 2016, the highest of all international visitors.

"If the number of Chinese tourists decreases, entire tourism-related services sectors in the US are set to be harmed, including shopping destinations, airlines and the catering industry," Jiang said.

In the beginning of the month, Brand USA, an organization under the Travel and Tourism Act to promote the US globally, led a group of eight tourism-related US entities to Harbin, capital of Northeast China's Heilongjiang Province in a bid to attract more tourists.

The US Travel Association report also said that China is projected to be the US' second-largest overseas inbound market by 2020.

However, experts noted that under the current Sino-US trade relations, the goal might not be achievable.

"Chinese people's sentiment toward the US will surely be affected by the US policy on China, and to find an alternative country for travel is 'effortless' for tourists," Jiang noted.

"Chinese people will 'vote with their feet' like they did last year during South Korea's Terminal High Altitude Area Defense system issue."

A 40-something mother in Nanjing, capital of East China's Jiangsu Province told the Global Times that she was planning to take her son, who has just finished the college entrance examination, to the US for this summer vacation, but she has changed her mind due to the unstable situation.

"I hoped that my son could experience the local culture in an English-speaking country like the US, but due to the Sino-US trade spat, and concerns over the gunshots and robberies in the US, we decided to go to Europe instead," she said.

"Declining interest in the US as a tourist attraction is the choice of the Chinese people, which is not forced by the government, showing that the country, from the government to its people, is quite concerned and cautious about the prospects of the US," He Weiwen, senior fellow at the Center for China and Globalization, told the Global Times on Wednesday.

Given the current situation, it is highly possible China will target other US service trade sectors. For example, China might choose not to open its banking and insurance sectors to US enterprises when opening up further to other countries, He noted.