BUSINESS Chinese vaccine output this year to be highest since 2007

Chinese vaccine output this year to be highest since 2007 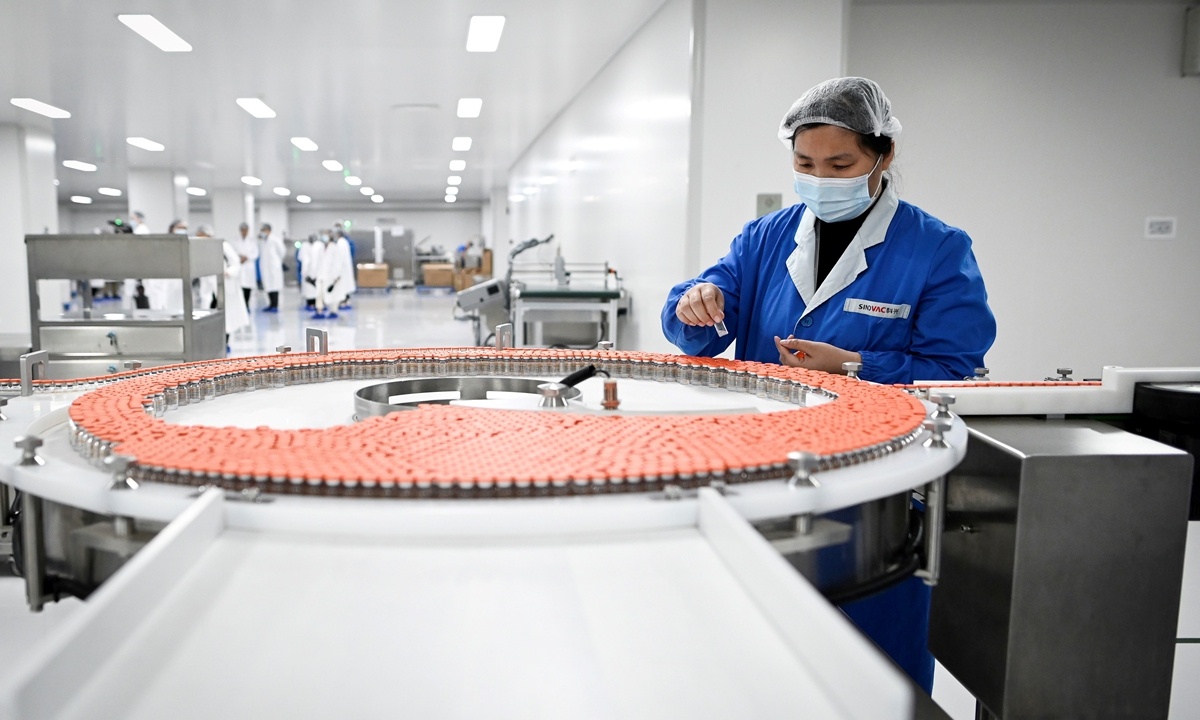 China's vaccine output this year is expected to be the highest since 2007, exceeding 1 billion and surging further next year against the backdrop of anticipated mass production of COVID-19 vaccines in the coming weeks. Industry analysts said that Chinese vaccine suppliers have the scale and capacity to meet the booming global demand for vaccines, which is no less than that of the US vaccine companies.

In the past, the global competition pattern of vaccines was oligopolistic, in that pharmaceutical companies based in Europe and the US - such as GlaxoSmithKline, Merck and Pfizer - divided the world and held 90 percent of the global market, according to media reports.

However, although it is difficult for China's emerging companies to gain share from the global giants, the development of COVID-19 vaccines may provide an opportunity to overtake these companies with world-class quality and more competitive prices.

Following the United Arab Emirates, Bahrain's national health regulator announced on Sunday that it had approved the registration and marketing of the inactivated COVID-19 vaccine developed by Sinopharm Group. In addition, phase III clinical trials of the vaccines developed by Sinovac and Cansino Biologics have been conducted in Brazil, Mexico and other countries, with the data to be released soon.

Four Chinese vaccines had been awarded contracts for nearly 500 million doses in at least 16 countries and regions as of Tuesday, and the number is still growing, media reports said.

COVID-19 vaccines are available in some hospitals in East China's Zhejiang Province, where the regular price for a single dose of Sinovac's vaccine is about 200 yuan ($30.6), according to media reports.

However, experts said that this price can be reduced via mass production and sales.

"Sinovac is 200 yuan per dose, which I think is still rather expensive, and the price of Chinese vaccines should be about 50 yuan instead," Tao Lina, a Shanghai-based vaccine expert, told the Global Times on Tuesday.

Pfizer and BioNTech have set the initial price at $19.50 a dose, which comes to $39 per patient since each person requires a two-dose regimen, Forbes reported on November 17.

By the end of the year, 600 million doses of COVID-19 vaccines will be provided in China, which means revenue of 30 billion yuan if they are priced at 50 yuan per dose, which should be fairly adequate to cover the costs of R&D and production, Tao said.

Experts said that the potential cost reduction via mass production will offer a competitive advantage for Chinese COVID-19 vaccines in the global market, including the US.

Meanwhile, the production capacity for rabies vaccines can be redirected to make COVID-19 vaccines due to the similar technologies used. China issued 58.83 million doses of rabies vaccines in 2019 and 34.17 million in the first half of 2020, according to public statistics.

With the launch of the COVID-19 vaccines, China's total vaccine production capacity will be greatly expanded, which will enable it to serve not just China but the world, experts said.

"China should have more vaccine production lines than the US, partially because of its huge population, which requires more vaccines," said Yang Zhanqiu, deputy director of the pathogen biology department at Wuhan University, noting that many medical production lines have been transformed into those used to make COVID-19 vaccines.

In addition to production capacity, China's vaccines can be preserved at -18C to -20C for long-term storage, while the US' Pfizer mRNA vaccine needs to be kept at -70 C, which when combined with the rising shortage of dry ice in countries such as the US, makes the Chinese vaccines a more preferred choice for people around the world.

"China's annual output of all kinds of vaccines is about 1 billion doses and this number is expected to be hugely surpassed by the end of this year, when China launches 610 million doses of COVID-19 vaccine, meaning the total production of Chinese vaccines will be the highest since 2007," said Tao.

"It is unlikely that a single COVID-19 vaccine will fundamentally increase China's share of the global vaccine market, but by using the vaccine around the world, many people will have real access to the Chinese vaccine and realize that its effectiveness is not inferior to that of vaccines from the US and Europe," Tian Hongjian, a director with the China Medicinal Biotech Association, told the Global Times on Monday.