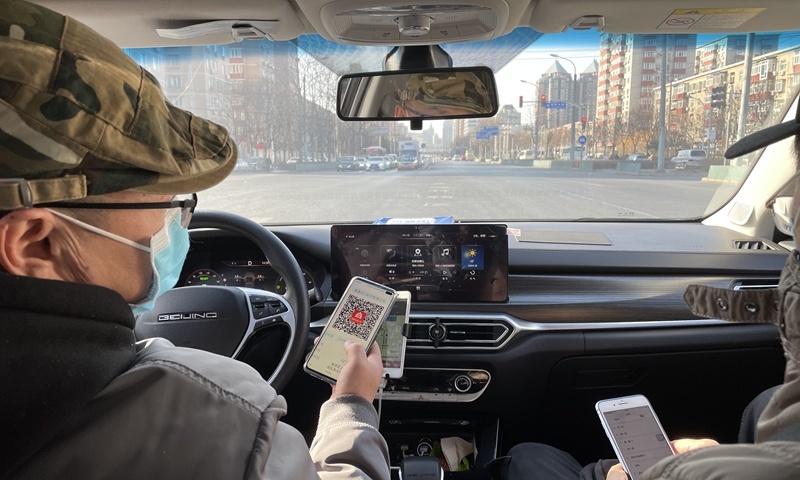 A passenger scans a health code provided by a car-hailing driver in Beijing on Monday, the first day that Beijing required car hailing services to register the health codes of passengers. Photo: Liu Caiyu/GT

The Chinese version of the international travel health certificate was officially launched on Monday on the WeChat mini program, available for Chinese citizens, according to the official WeChat account of the Department of Consular Affairs under the Foreign Ministry (FM).

The health certificate contains an encrypted QR code for the relevant departments of various countries to verify its authenticity and read personal information. In addition to the electronic display, it can also be printed to generate a paper version.

In the era of epidemic normalization and the post-epidemic era, the importance of health factors in international personnel exchanges will become more prominent. In the near future, as more and more countries reach mutual recognition of health certificates with China, the Chinese version of international travel health certificates will play a greater role in promoting healthy, safe and orderly exchanges of transnational personnel, and provide Chinese citizens a solid guarantee when traveling across the world, the FM said.

The health certificate is used to display the results of nucleic acid serum Igm antibody tests of Chinese outbound personnel, as well as their health information including vaccination status, FM spokesperson Zhao Lijian told a press conference on Monday.

China's State Councilor and Foreign Minister Wang Yi revealed the plan at a press conference held on the sidelines of the fourth session of the 13th National People's Congress (NPC) on Sunday. Wang said that China will roll out health certificates for international travelers to facilitate the safe and orderly flow of personnel, which, while protecting personal privacy, will realize the mutual recognition of information on COVID-19 nucleic acid tests and vaccinations.

China is willing to address concerns raised by outside parties, coordinate with each country's health code information mutual recognition mechanism, provide one another with visas and other cross-border travel conveniences, and actively promote the establishment of healthy, safe and orderly personnel movements, Zhao added.