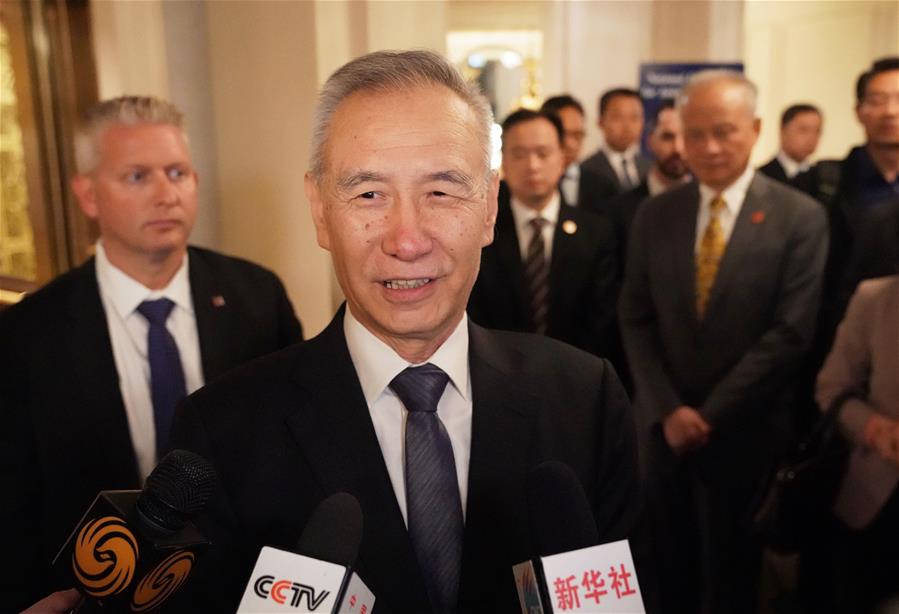 Chinese Vice Premier Liu He, also a member of the Political Bureau of the Communist Party of China Central Committee and chief of the Chinese side of the China-US comprehensive economic dialogue, met with US business leaders and the International Monetary Fund (IMF) chief in Washington on Wednesday afternoon.

When meeting with Craig Allen, president of United States-China Business Council (USCBC), and Myron Brilliant, executive vice president and head of international affairs at the US Chamber of Commerce, the Chinese vice premier said the China-US economic and trade relationship is of vital importance, and has strong spillover effect and global impact.

Liu said the Chinese delegation, which came to the negotiations with utmost sincerity, is willing to carry out serious dialogue with the US side on issues of mutual concern, including trade balance, market access and investor protection, and push forward the negotiations to achieve positive progress.

Allen and Brilliant said that there are no winners but only losers in trade wars, and that the business community in the United States does not want to see the imposition of additional tariffs.

They said they hope that the two sides will achieve concrete and clear progress during this round of trade negotiations, deepen mutual trust, lay a good foundation for further talks, and eventually find ways to resolve differences and end the trade war. The US business community, they added, is willing to play a positive role in this process.

When meeting with IMF Managing Director Kristalina Georgieva, Liu said that the upcoming round of high-level trade negotiations between China and the United States has drawn high attention from all parties and that it is the whole world's common aspiration to end the trade war.

The Chinese side is willing to reach consensus with the US side on issues of mutual concern through this round of talks on the basis of equality and mutual respect so as to prevent the disputes from further escalating and spreading, Liu said.

The Chinese side, Liu added, hopes that the international community could make concerted efforts to safeguard world stability and prosperity.

Citing IMF estimates, Georgieva said the trade war is causing a severe impact and poised to shave 0.8 percent off the global GDP by 2020.

Georgieva also said that the IMF highly commends China's resolve and sincerity in addressing issues through negotiations and that her organization is willing to play its due role in safeguarding multilateralism and free trade rules.