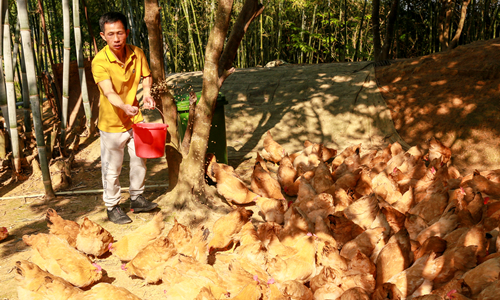 China's move to ban wildlife trade amid the COVID-19 epidemic left some farmers raising animals for living with an economic dilemma. Local governments have assisted them to reach goals in poverty reduction work, as China vows to eradicated poverty domestically by the end of 2020.

Li Boan has planned to buy 2,000 to 3,000 chickens after his business of raising bamboo rats, a food ingredient in some southern China regions, was halted according to the regulation.

Li said he was initially sad in March, when his 500 bamboo rats were disinfected and buried because of the government's ban on trading all wildlife in the wake of the novel coronavirus (COVID-19) pandemic.

Li, a farmer in Heyuan city, South China's Guangdong Province, said the bamboo rats he had bred for two years could have earned him "a lot of money" if there was no wildlife trade ban.

Farmers like Li who rear wild animals for meat therefore have to give up their business, facing huge financial pressures.

To help these wild animal raising farmers to survive the financial crisis, Heyuan authority is guiding and teaching them to shift their business, said Yuan Dingyang, an official with Heyuan poverty-alleviation bureau.

"We attach great importance to this issue," Yuan told the Global Times, adding that poverty-alleviations officials across Heyuan's counties and villages had visited every wildlife-breeding household by late February to listen to their difficulties and persuade them to switch to other businesses.

Li is turning to raise hens under government's technical support. He plans to buy chickens, which may create 30,000yuan of profit after months of raising.

"That profit is less than breeding and trading bamboo rats," Li told the Global Times, adding that his 500 bamboo rats could earn him at least 100,000 yuan of net income each year. "But raising hens is the best choice for me right now."

Dongyuan county government had also spent 2 million yuan in financially helping Li and other wildlife-rearing farmers. Li said he had got a subsidy of 30,000 yuan to stop raising bamboo rats.

What assures the affected farmers more is that government is trying a variety of ways to make their new businesses profitable. Poverty-alleviation officials in Dongyuan, reached a mushroom processing company which had promised to regularly buy mushrooms from local growers at reasonable price, Yuan mentioned.

In some regions of China, wildlife breeding used to be a government-encouraged industry for people living in poverty. In Heyuan, there are 785 former poverty-stricken people who reared wild animals such as bamboo rats and snakes to make a living, and the now-banned business had helped them got out of poverty in 2019, Yuan said.

China has set a goal to uplift all citizens below the poverty line by the end of 2020. "I'm confident that Heyuan can meet the goal by turning the crisis into many opportunities in time," Yuan told the Global Times.