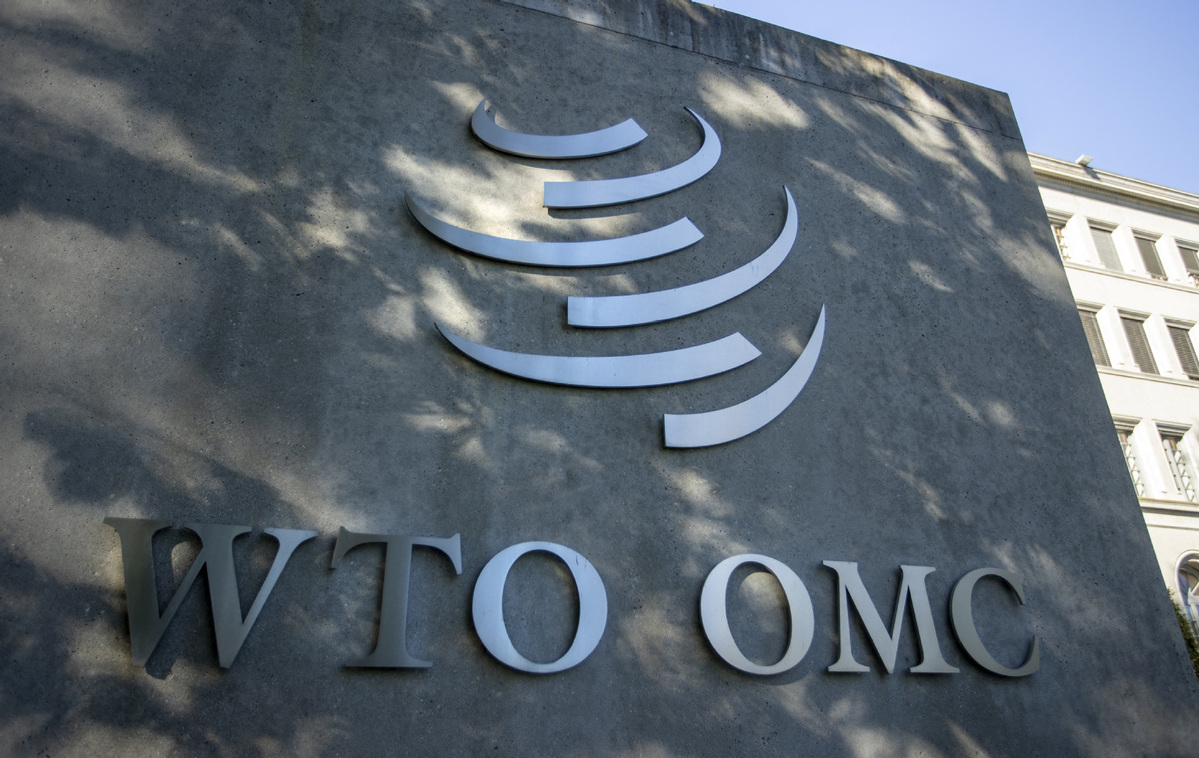 A logo is seen at the World Trade Organization (WTO) headquarters before a news conference in Geneva, Switzerland, Oct 5, 2022. (Photo: Agencies)

China's chip lawsuit against the United States at the World Trade Organization demonstrates the country's upholding of multilateralism and underlines its determination to safeguard the stability of global semiconductor supply chains, officials and experts said on Tuesday.

The comments came after China filed a lawsuit at the WTO, which the Ministry of Commerce said is a necessary way to address its concerns and to defend its legitimate interests, against the US over the latter's chip export control measures.

Foreign Ministry spokesman Wang Wenbin called on Tuesday for countries to stand up against the US' unilateralism and protectionism, saying the move bears on international justice and the stability of the international trade system.

"Facts prove that the security exception article is not a safe haven for unilateralism and protectionism," Wang said.

In October, the US, citing what it described as national security concerns, announced a sweeping set of export controls that were seen as an effort to contain China's semiconductor industry.

As a typical practice of trade protectionism, the US curbs obstructed the normal international trade of chips, threatened the stability of the global industrial and supply chains, and violated international economic and trade rules, the Ministry of Commerce said on Monday.

Many US chip companies count the Chinese mainland, which imported more than $400 billion worth of semiconductors in 2021, as their biggest market. Most major US chip companies pull in at least 25 percent of their sales from the mainland market, according to an article by Christopher Thomas on the Brookings Institution's website.

Zhao Hong, a professor at Peking University's Law School and former chairperson of the WTO Appellate Body, said the lawsuit is timely, considering that the WTO will conduct the biannual trade policy review on the US this week.

"The move showed that China wants to settle the dispute and safeguard legitimate interests of Chinese enterprises under the framework of WTO rules," Zhao said.

"That has demonstrated China's upholding of multilateralism and support for the WTO, which will inject positive energy into the organization's reforms for overcoming the crisis that its dispute settlement mechanism faces nowadays," she added.

According to the WTO rule book, the US is expected to respond within 10 days after China filed the case. The two countries are then expected to have consultations. If the consultations fail to resolve the dispute, a dispute settlement panel could be established to look into the case.

Bai Ming, deputy director of international market research at the Chinese Academy of International Trade and Economic Cooperation, said Washington has repeatedly abused and overblown the concept of national security to impose a series of well-calculated restrictions on exports of advanced semiconductor technology to China.

"The US is also pressuring other countries, including the Republic of Korea and the Netherlands to adopt similar chip restrictions on China. Such practices have severely disrupted the global semiconductor industry," Bai said.

State Councilor and Foreign Minister Wang Yi expounded on Monday China's position on the US CHIPS and Science Act in a video talk with ROK Foreign Minister Park Jin. Wang stressed that the US acts obviously damaged the legitimate rights and interests of countries including China and the ROK.

Dutch Foreign Trade Minister Liesje Schreinemacher told lawmakers last month that the Netherlands would make its own decision regarding Dutch company ASML's chip gear sales to China amid trade rule talks with the US and other allies.

Reuters reported last week that amid pushback from trade groups, US senators had to scale back a proposal that placed new curbs by the US government and its contractors on the use of Chinese-made chips.

"This is the latest example of the US business community doing its part to weaken proposals aimed at crimping China's burgeoning chip sector, because they know too well that such measures raise costs and harm their revenues," Zhong said.