BUSINESS Christmas season all about business, not religion: vendors

Christmas season all about business, not religion: vendors 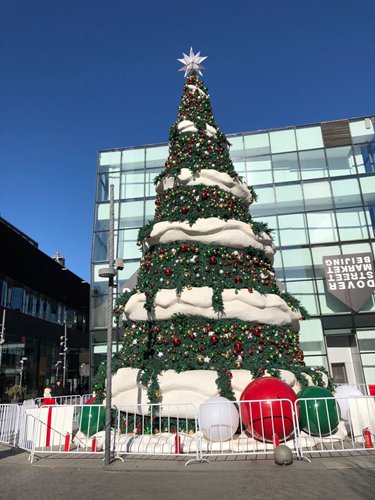 A nearly 10-meter-tall Christmas tree is installed at Sanlitun on Sunday, one of the most famous shopping streets in Beijing. (Photo: Global Times)

Christmas atmosphere can be easily found throughout China even as some cities have issued stricter regulations on holding holiday events and sales.

In Beijing's Sanlitun shopping district, a jewelry brand established a Christmas tree some 10 meters tall outside a shopping mall to promote holiday sales.

The cosmetic store's salesperson told the Global Times on Sunday that they did not receive any notice banning Christmas sales.

"We offer holiday discounts for customers and neighboring stores have similar promotions," the employee said.  She asked not to be named.

Foreign female dancers wearing gift-box shaped costumes attracted the attention of passers-by as they jigged and jangled in front of a merry-go-round on Saturday evening.

Cindy Wan, an employee at the complex, told the Global Times on Sunday that customers really enjoyed the performances and the festive holiday atmosphere.

"People here do not celebrate Christmas for its religious meaning," Wan said.

Christmas trees and mistletoe, as well as Santa Claus' stockings and hats, filled the shelves.

A Christian who asked not to be named told the Global Times that she planned to spend Christmas at St. Joseph's, or Wangfujing Church.

She told the Global Times that in her hometown of Xingtai, North China's Hebei Province, each year believers celebrate Christmas together by performing a short drama that persuades people to do charitable work.

Meanwhile the city of Langfang, also in Hebei Province, near Beijing, banned Christmas sales on streets and holiday-themed decorations to "maintain a clean city environment for an upcoming awards competition," according to local authorities.

Zhu Wei, a professor at the China University of Political Science and Law, told the Global Times on Sunday that "it is understandable that local authorities issue such regulations to maintain cleanness of the streets or prevent stampede risks."

But a thorough ban, Zhu said, "goes against people's will to relax and celebrate holidays. Meanwhile, religious believers are given the right to mark the day."

A woman in her 20s, who did not give her name, told the Global Times at Sanlitun that she loves the atmosphere of the  holidays created by Christmas trees and festive decorations.

"The Christmas mania is more about business than culture in China," she said, noting that growing cultural confidence means that Chinese people do not need to rule out Western holidays.

"We don't need to be nervous about the mania," she said.