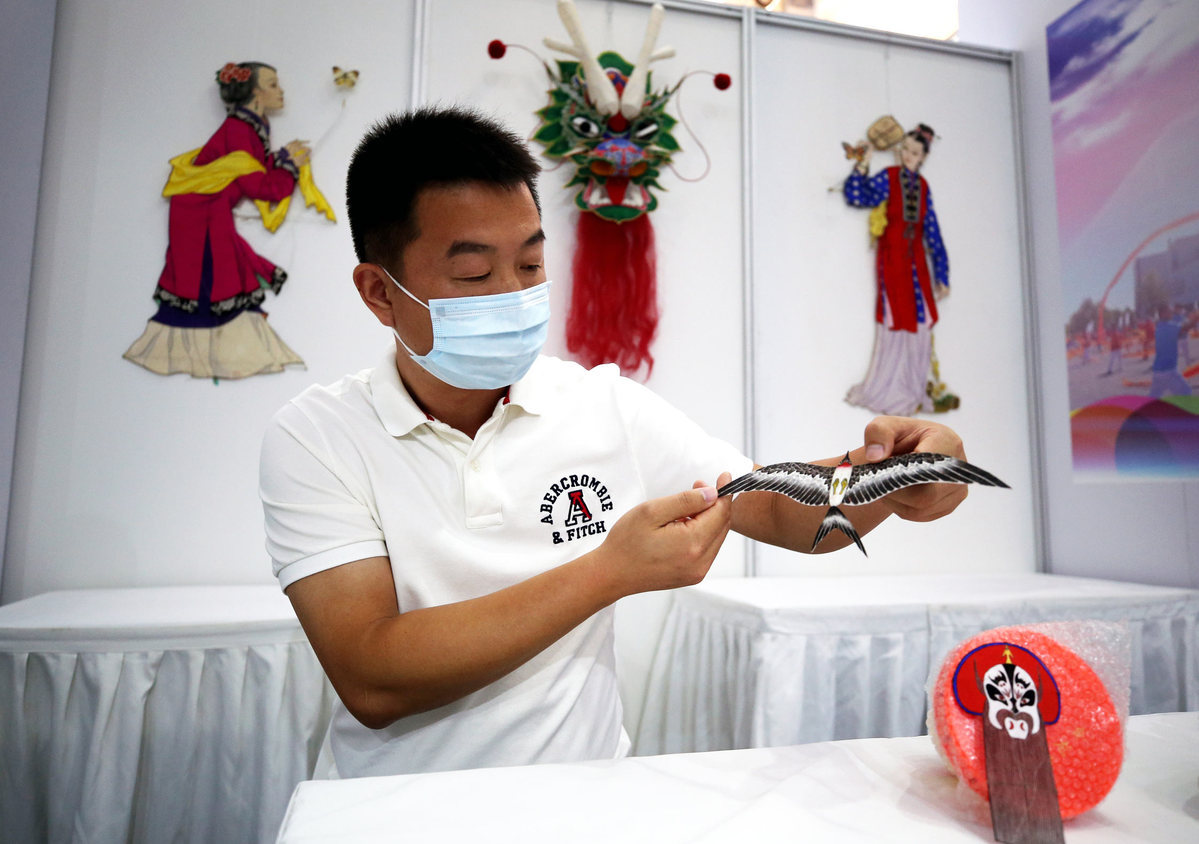 A worker displays a kite at an exhibition hall of the 2020 China International Fair for Trade in Services in Beijing on Thursday. The fair will be held from Friday to Wednesday. (Photo: CHINA DAILY)

The China International Fair for Trade in Services starts on Friday, marking the country's first major international trade event held offline since the start of the COVID-19 pandemic. The event will help bolster worldwide economic recovery and strengthen global ties in fighting the pandemic, officials and experts said on Thursday.

President Xi Jinping is scheduled to deliver the keynote speech at the event, according to Xinhua News Agency.

The CIFTIS, scheduled for Sept 4 to 9, sends a signal that China will continue to adhere to economic opening-up and support globalization and international economic and trade cooperation, Wang Bingnan, vice-minister of commerce, said at a news conference on Thursday.

Trade in services plays an increasingly prominent role in global trade and is an important factor in driving global economic growth, he said.

China's total trade in services amounted to 5.4 trillion yuan ($789.7 billion) in 2019 and the nation has been the world's second-largest trader in services for six consecutive years, according to the Ministry of Commerce.

Due to the COVID-19 pandemic, global trade is expected to contract significantly this year. In the post-pandemic era trade in services will account for an increasing share of overall global trade, Douglas McWilliams, an economist from the UK-based Centre for Economics and Business Research, was quoted by Xinhua as saying.

Against that backdrop, the CIFTIS will offer an important trade platform to help both domestic and overseas companies secure new orders and deals and boost the development of global trade in services, Wang said.

The CIFTIS will also promote the country's stable economic development and cooperation in fighting the pandemic, Wang said.

The event is set to increase international attention on the development of trade in services in the post-pandemic era, and promote international cooperation in the field, according to Zhou Mi, a senior researcher at the Chinese Academy of International Trade and Economic Cooperation in Beijing.

It also demonstrates China's success in containing the pandemic, proving that effective prevention and control measures against the virus can help return the economy back to normal, he said.

"China's trade in services, driven by market mechanisms, has developed very fast, supported by government measures to deepen opening-up and optimize the business environment, such as those that ease the establishment of new businesses and facilitate the healthy operation of enterprises," Zhou said.

"The event will serve as an effective platform for government officials and experts in trade in services worldwide to gather and communicate, and will help with the sustainable development of international trade in services as well as the world economy after the outbreak of the pandemic."

The country's fast pace of development in inbound and outbound trade in services, especially in the financial sector, has bolstered the confidence of foreign investors in the Chinese economy, which is reflected by the enthusiasm of foreign participants in the event, he added.

The CIFTIS is one of China's three major trade exhibitions, with the other two being the China Import and Export Fair and the China International Import Expo.

The CIFTIS will be held both online and offline this year, due to containment of the pandemic and efforts to tap the fast development of digital exhibitions, according to Yang Jinbai, Beijing's vice-mayor.

This year's CIFTIS has attracted participants from 148 countries and regions. A total of 18,000 companies and organizations from across the world have registered to participate both online and offline, according to Yang.