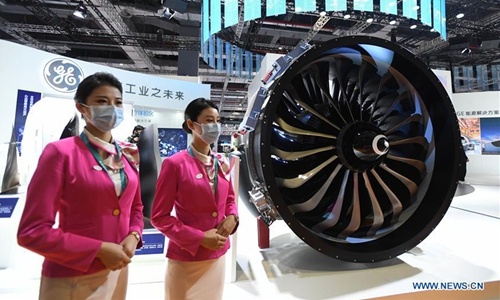 At a time when COVID-19 outbreak has battered the economy of every country in the world, China held the third China International Import Expo (CIIE) which posted more cumulative intended turnover than the previous two fairs, sending a clear signal that China is firmly committed to expanding opening-up and deepening win-win cooperation.

Wang Wenbin, a spokesperson for China's Foreign Ministry, made the remarks at a regular press briefing on Wednesday.

The expo - being held from November 5-10 in Shanghai - achieved cumulative intended turnover of $72.62 billion, up 2.1 percent from last year.

Wang said that over 100 companies have signed to attend the fourth CIIE to be held in 2021, reflecting the bright prospect of China's economic development and global economic recovery.

"We believe that only by sticking to the right direction of opening-up and cooperation can the post-COVID-19 global economy return to its right track as early as possible," he said.

As part of the country's move to expand opening-up, China implemented the Foreign Investment Law and relevant regulations, cut foreign investment "negative list" to 33 items from 40, and increased the number of free trade zones to 21 from 18, among others.

Chinese authorities announced a series of new opening-up measures during the opening ceremony of the CIIE, including releasing a negative list for cross-border trade and cutting restricted import catalogue, reflecting that China's door has been opened up steadily wider.