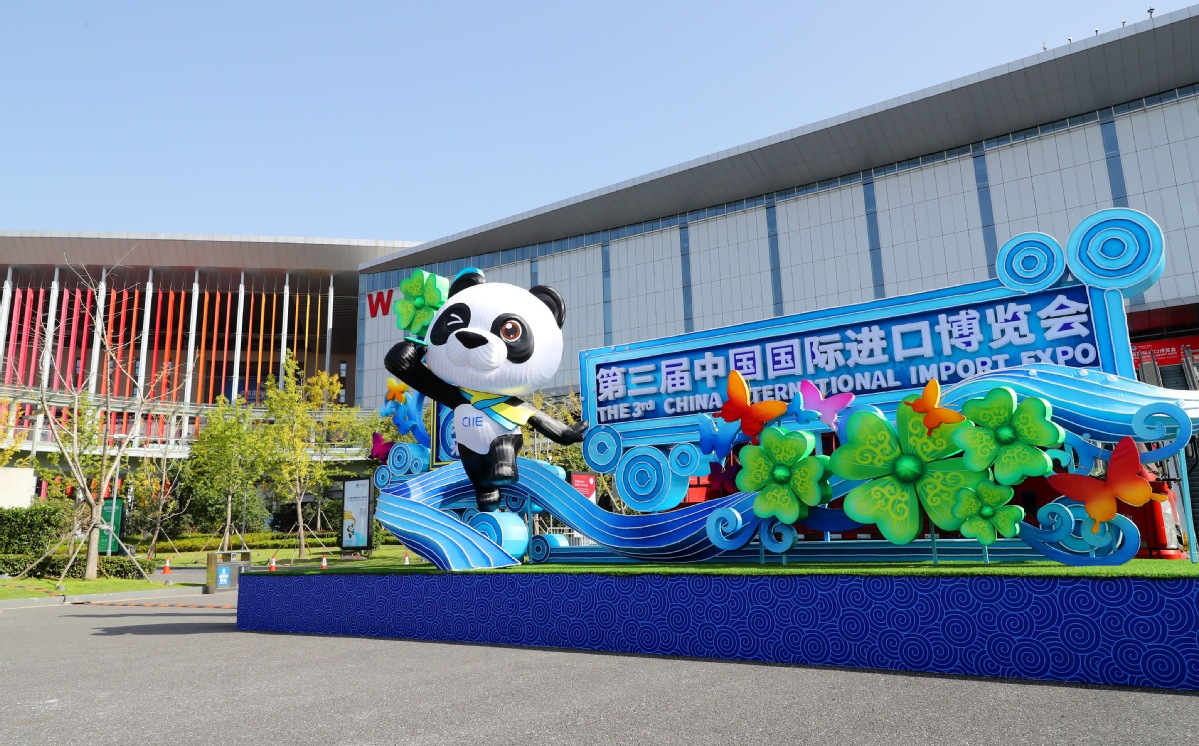 The photo taken on Oct 23 shows Jinbao, mascot of China International Import Expo, welcoming guests from around the world in Shanghai. (Photo: Xinhua)

The third China International Import Expo, to be held in Shanghai on Nov 5-10, will bring more opportunities from China for world economic development, China Securities Journal reported on Monday.

Increasing number of enterprises have signed up for the third CIIE with enthusiasm, because the successful first and second CIIEs made the participating companies get tangible benefits, said Bai Ming, deputy director of the Ministry of Commerce's International Market Research Institute.

Enterprises hope to find more business opportunities through the CIIE platform. In particular, the steady development of China's economy has increased market spillover effects. Companies are optimistic about the import opportunities brought by the expanding Chinese market, Bai said.

The "brand effect" of the CIIE has attracted more foreign companies to participate, and the scale of the third CIIE has also exceeded the previous ones. The third CIIE has a larger exhibition areas, better arrangement setting, and higher quality of exhibitors, said Gao Feng, spokesman for the Ministry of Commerce.

The preparatory work for the third CIIE is being carried out in an orderly manner with 5G technology coverage in key areas, People's Daily reported on Monday. Four CIIE reception centers will start operation on Oct 28 at Hongqiao and Pudong airports in Shanghai, The Paper said on Sunday.

The first exhibit for the third CIIE arrived at the National Convention and Exhibition Center in Shanghai on October 23, officially kicking off the exhibition arrangement stage. The setting up of exhibition booths and exhibit arrangements is expected to be completed by around Nov 2, China Securities Journal reported on Monday.

Multiple measures, including exhibits' customs clearance facilitation, preferential taxation and strengthening epidemic prevention and control, have been taken to guarantee the success of the third CIIE, according to Gao.

Starting from the third CIIE, preferential tax policies for the retention and purchase of imported exhibits will be implemented during the exhibition period, said Wang Bingnan, vice-minister at the Ministry of Commerce.

This policy is conducive to stabilizing market expectations and to hold the third CIIE in the context of the normalization of epidemic prevention and control is also conductive to stabilize industrial and supply chains and is of great significance to accelerating the recovery of the global economy, according to industrial insiders.

To hold the third CIIE can also showcase the world China's firm stance on promoting economic globalization and building a community with a shared future for mankind, said Qi Xin, director at the Ministry of Commerce's Belt and Road Economic and Trade Cooperation Institute of the Chinese Academy of International Trade and Economic Cooperation.

More and more world-class enterprises have signed up to participate in the CIIE, and it showcases the consensus and actions of global market players on economic globalization and open development.

The CIIE will provide more opportunities from China for world economic development, by promoting trade upgrades, industrial upgrades, and consumption upgrades, according to industrial insiders.