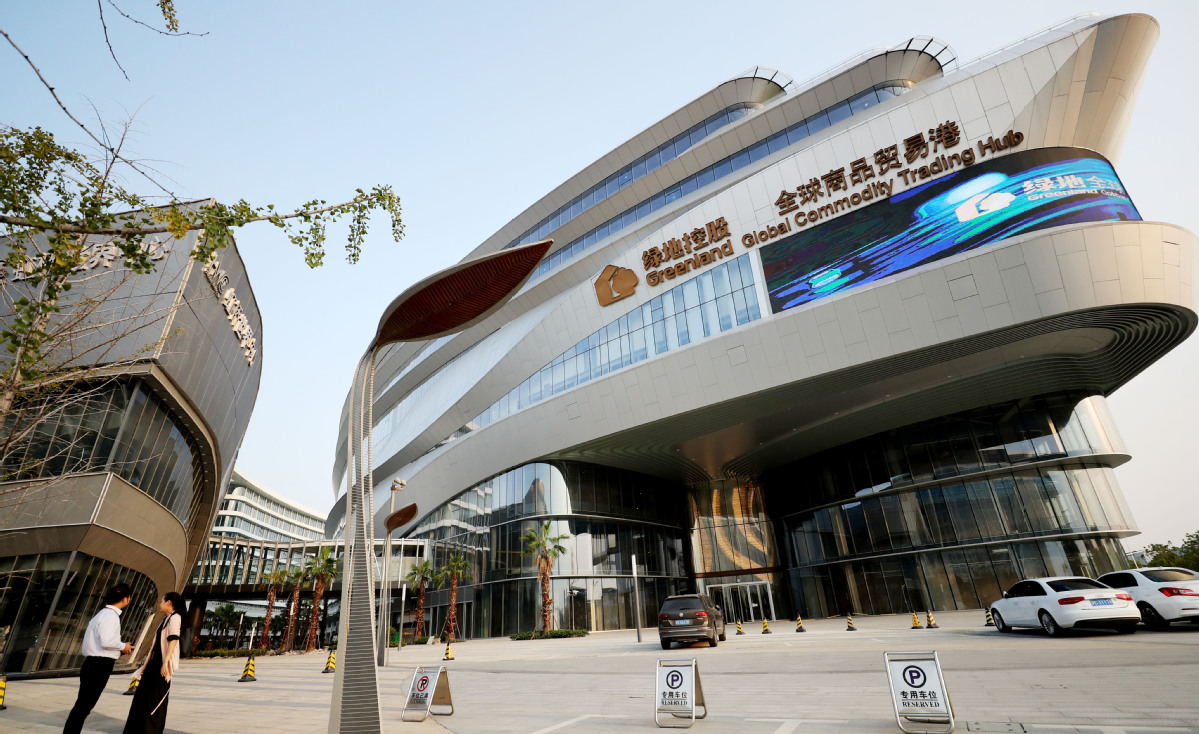 Visitors are seen at the entrance to the Global Commodity Trading Hub in Shanghai. (Photo: Xinhua)

Xue Yingjie, general manger of Greenland Global Commodity Trading Center Group, operator of the hub, said: "The import channels will be expanded and the import procedures will be further optimized to make the hub an important part of the country's dual circulation pattern.

"The hub will make best use of its commerce and trade industrial chains to nurture a number of companies that excel in supply chain and commodities circulation."

The hub has already introduced more high-end resources, which have helped create not only new business models but fresh consumption opportunities.

A 1,000-square-meter diamond distribution center was unveiled at the hub last September, to directly sell the 1-to 12-carat diamonds inlaid by Israeli craftsmen on-site.

Sales of Caprice Diamonds in the overseas markets were quite sluggish due to effects of the COVID-19 pandemic. The loss was somehow offset by the positive growth in the Chinese market, Xue said.

During the May 5 Shopping Festival launched in Shanghai earlier this year, sales revenue at the diamond sales center exceeded 25 million yuan ($3.7 million), with more than 110 1-carat bare diamonds sold during the period.

This is also one of the company's efforts to realize some of the hitherto overseas consumption from the domestic market, said Xue.

"China's promotion of high-quality trade, stimulation of domestic consumption, as well as the new round of high-level opening-up are all in evidence at the CIIE. Such policies have helped accelerate Greenland Global's whole industry chain mapping across all of its business units," he said.

Greenland Global is part of the Shanghai-based State-owned Greenland Group's efforts to seek diversified growth drivers. It was opened in November 2018 as a 365-day trade platform to extend the services of the CIIE.

The hub has so far accommodated 160 companies from 64 countries and regions, among which more than 90 percent of the companies have participated in the past two CIIEs or will be present at the third exhibition in November. Nearly 5,000 products exhibited at the CIIE are now available in 22 major Chinese cities.

The trading volume realized on the platform has exceeded 50 billion yuan over the past three years, increasing the international trade business of its parent company Greenland Group to more than 10 billion yuan.

Greenland Group's focus was on the real estate sector during its early stages. Today, it is seen as a role model in mixed-ownership reform. It has set up an extensive commercial network covering finance, retail, and healthcare sectors.

In 2015, Zhang Yuliang, group chairman, announced the establishment of overseas purchasing centers to build up its consumption business sector.