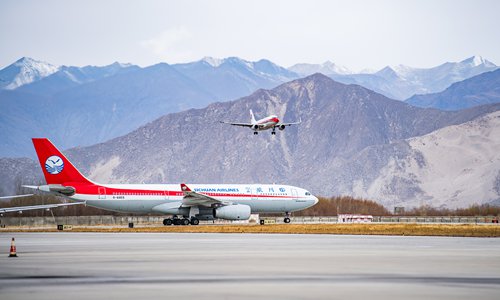 A total of 101 civil air routes have been launched in Southwest China's Tibet Autonomous Region, local news reported on Monday.

These 101 civil air routes  are operated by 11 airlines and connect 51 cities including most provincial capitals, second and third tier cities in China.

A total of 130 flights are handled on daily basis at airports in Tibet.

In the next step, airports in the autonomous region will continue to focus on high-quality development, encourage and support airlines to launch more routes connecting Tibetan cities with other cities, and continue enhancing their passenger transport capacity and flight support capacity.

According to the report, 4,855 airplanes took off and landed in Tibet in September with a 16.8 percent year-on-year increase.

The Tibet Autonomous Region also had a cargo throughput of 4,448.8 tons, a year-on-year increase of 12.1 percent, with its inbound and outbound quantity increased by 13.9 and 6.9 percent respectively, according to the report.

From January to September, Tibet has handled 39,989 flights, a year-on-year increase of 12.7 percent, transporting more than 4.3 million passengers.