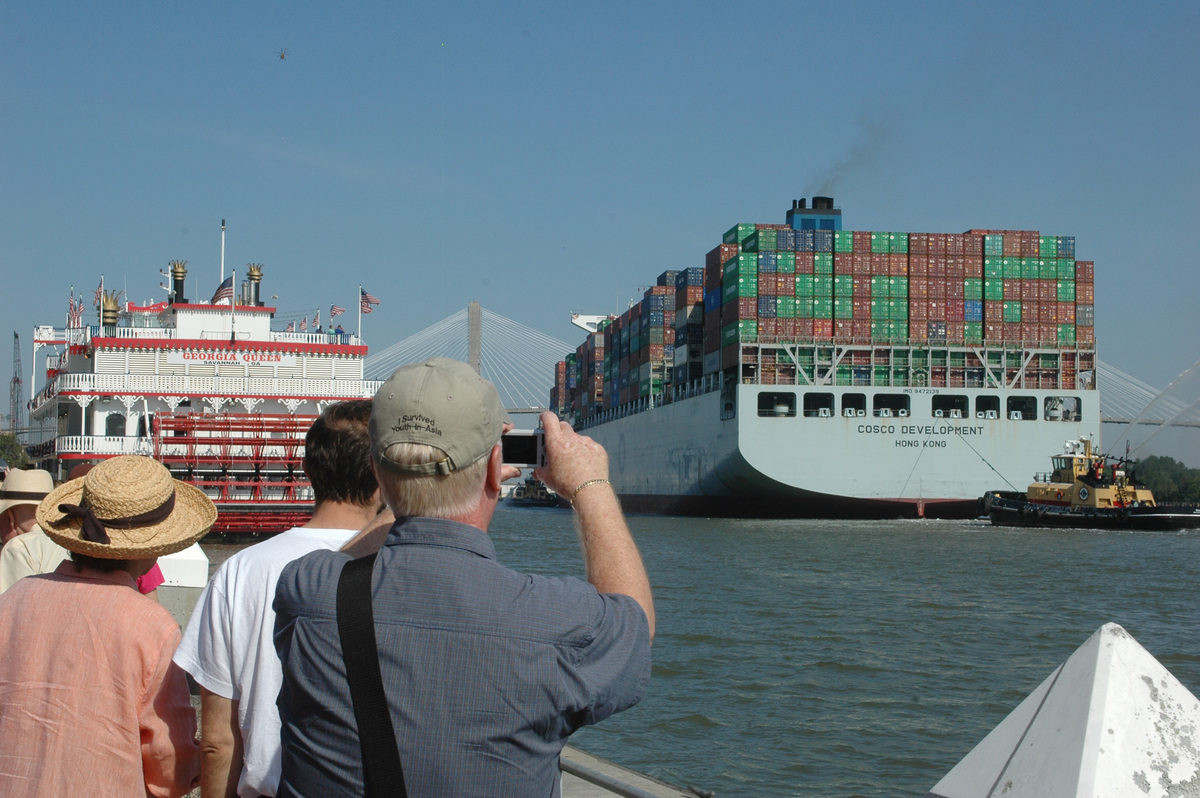 The Cosco Development, the largest container ship to ever call on a US East Coast port, passes as a crowd gathers on River Street in Savannah as it moves on to the Garden City Terminal on the Savannah River. (Photo: China Daily)

Washington should face the matter of deficit squarely: former vice-premier

The "real" trade imbalance between the world's two largest economies has long been overstated by 20 percent. Better data would give a more balanced picture of Sino-US trade and reflect the gains that both sides derive from their economic relationship, said former Chinese Vice-Premier Zeng Peiyan.

There has always been divergence between Chinese and US figures on the bilateral trade gap due to the different methods used. Current methods omit trade in services from the trade balance, overlooking China's role in processing trade, and thus overestimating the trade deficit, Zeng told a seminar in Hong Kong on Tuesday.

The two-day event, themed "US-China Trade and Economic Relations: What Now, What Next", invited former government officials, industry representatives and academics from home and abroad to share their insights on the year-old Sino-US trade friction, which has become the single most important factor in the global economy and markets.

"The real trade imbalance should be viewed in a more comprehensive and objective manner. Trade statistics should be improved to account for not only trade in goods but trade in services, to focus on both the total value of trade and the true value added in each country, and to reflect the perspective of gross domestic product as well as gross national product," said Zeng, who is also the chairman of the China Center for International Economic Exchanges.

There is no shortage of research whose findings undercut the economic foundation for US tariffs on Chinese products. According to the research jointly conducted by the two countries' commerce ministries, the US trade deficit with China has been overrated by 20 percent for years.

Such an overvaluation manifests itself in two aspects, Zeng explained. On the one hand, the US has long put the entrepot trade and re-exports from economies such as Hong Kong on China's books. In addition, there has always been difference between the sale price of Chinese exporters and the bid price of US importers due to the existence of international intermediaries. This leads to disparate customs statistics on both sides.

Zeng's remarks echo the report published by China's Ministry of Commerce last month, which showed the "real" bilateral trade imbalance is merely $153 billion, or 37 percent of the headline figure released by the US government.

In the processing trade, Chinese exports of products assembled from imported components, the valued added to the product by China only remains a small fraction of the value used in the US calculations and should be taken into full account, the ministry argued.

Zeng said he believed the US restriction on high-tech exports to China is the policy reason for its growing trade deficit with China. In 2018, US exported $39.1 billion high-tech products to China, less than one forth of the high-tech products imported from China and accounting for just 10.6 percent of the total US technology exports worldwide.

Citing a research finding, Zeng said if Washington eases the curbs on technology exports to China to the level of restrictions placed on France, it will essentially cut down on the trade deficit with China by 35 percent.

As China reinforces the key principle raised in the last round of negotiations, access to US technology exports, an agreement for China to buy technology exports, currently blocked by the US, would help meet the needs of Chinese consumers and companies while reducing the trade deficit, Zeng said.

Such open trade speaks volumes that trade is mutually beneficial rather than the lopsided economic tie-up. "The US has gained tangible benefits from its economic and trade relations with China," Zeng noted.

"The US government should face the issue of trade deficit squarely. It should take a serious look at the reasons behind as well as the gains and losses from the trade imbalance. Simply levying tariffs is of no help but will be counterproductive."