Under fire from climate protesters over his company's part in a massive coal mine project, Siemens chief executive Joe Kaeser hammered home the group's green credentials at its annual general meeting Wednesday. 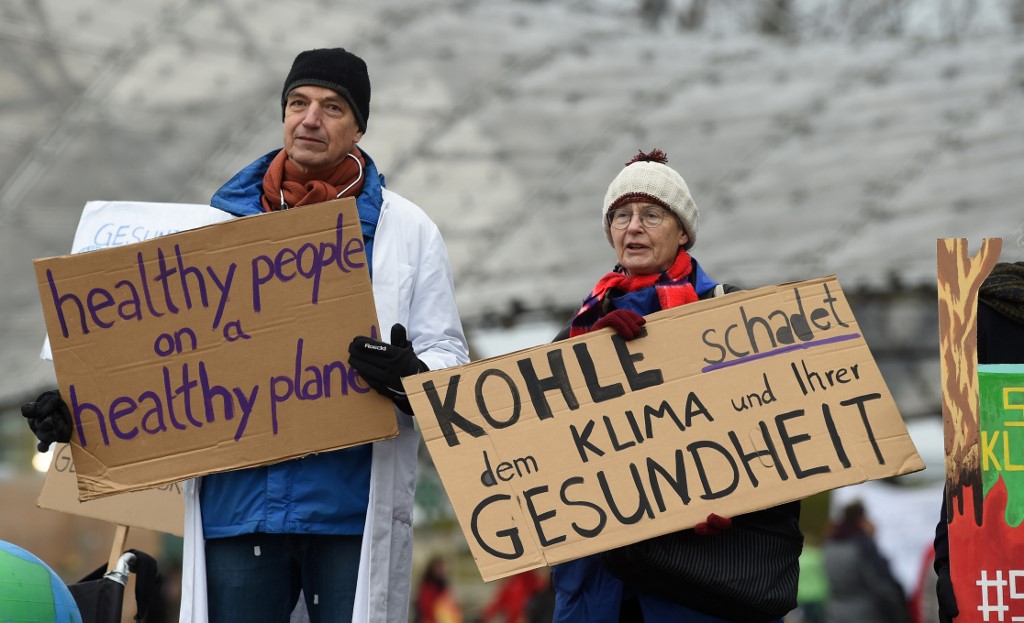 Siemens "did not see the whole picture correctly and in time" when agreeing to supply rail signalling equipment to the planned Carmichael mine in Australia, Kaeser told shareholders in Munich, as the chants of activists outside could be heard.

Kaeser said the company would make one billion euros ($1.1 billion) available between now and 2025 to identify and reduce greenhouse emissions in its supply chains.

But he complained about the company being the focus of "agitation", warning demonstrators and activists that "protest alone offers no solutions".

"Those who persist in rejecting dialogue and cooperation on solutions lose the moral right to discredit" companies and leaders who are taking climate action, Kaeser said.

In an earlier press conference, the 40-year Siemens veteran had called activists' focus on his firm over the 18-million-euro coal mine contract "almost grotesque".

Outside the Munich Olympiahalle venue, around 300 people rallied against the firm's contract with Indian mining company Adani, brandishing placards with messages like "We demand clean air" and "Healthy people on a healthy planet".

"We will continue our protests for as long as Siemens doesn't back down," said Helena Marschall, a representative of the movement, at a Tuesday press conference.

The demonstrators plan to urge the company to "abandon coal" at a larger protest in the afternoon.

Groups like Extinction Rebellion and Fridays for Future have homed in on the shareholder meeting as an opportunity to renew the pressure on Siemens.

"What's more important: a small financial loss in the short term, or the disastrous consequences such a project will have for generations?" Marschall asked.

She and other environmentalists have been invited to speak inside the cordon by a group of Siemens shareholders.

In mid-January, CEO Kaeser met leading German Fridays for Future activist Luisa Neubauer after protests across the country against Siemens.

He kept activists and observers on tenterhooks for weeks as he decided whether to stick with the coal mine contract.

But he later said in a statement: "We must fulfil our contractual obligations" relating to the signalling deal for the massive open-cast mine, not far from the iconic natural landmark the Great Barrier Reef.

"Only being a credible partner whose word counts also ensures that we can remain an effective partner for a greener future," Kaeser insisted at the time.

Siemens says it backs the 2015 Paris Agreement and aims to become carbon-neutral by 2030.

The company also plans to create a "sustainability committee" with powers to block environmentally questionable projects.

Activist Neubauer said she was not satisfied.

"This isn't just about one single coal mine," she told the daily Bild.

"If Siemens wants to be climate-neutral by 2030 but invests in a project that will mine coal until 2080, something doesn't add up."

The open-cut Carmichael mine is set to become operational next year and produce up to 27 million tonnes of coal annually.

Adani spent years trying to secure private finance for the coal mine before announcing in 2018 it was self-financing a trimmed-down, $2 billion version of the  project.

Supporters say the mine will bring hundreds of much-needed jobs to rural Queensland in eastern Australia.

But conservationists say the project threatens vulnerable local species and notes that the coal will have to be shipped from a port near the already damaged Great Barrier Reef.

Much of the coal from the mine will be burned in India, a country with some of the world's highest levels of air pollution.