Euro zone business growth dimmed again in April but the picture remained relatively bright as new business stayed buoyant and firms managed to build up backlogs of work, a survey showed on Friday. 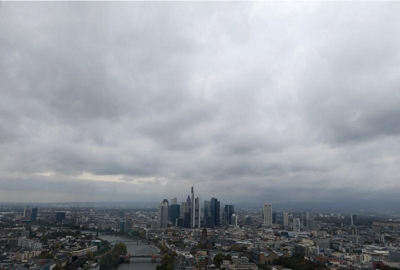 The skyline of the banking district is pictured in Frankfurt, October 21, 2014. (Photo: Reuters)

However, somewhat worrying for policymakers at the European Central Bank as they prepare to move away from an ultra-loose stance, inflationary pressures eased and the survey hinted at further easing in coming months.

That was a touch below a flash estimate but still well above the 50 mark separating growth from contraction. It was the lowest since January 2017.

Retailers had a disappointing March, official figures showed on Friday, with sales up a much slower-than-expected 0.1 percent as shoppers kept their hands in their pockets, adding to evidence the bloc’s economic upswing is fading.

A March Reuters poll said growth had already peaked but another poll last month said the ECB would still end its stimulus this year and hike interest rates in 2019. [ECILT/EU]

“It’s continuing something we have seen - European growth has slowed markedly since the end of last year. The encouraging thing is there are signs the numbers are starting to stabilize,” said James Nixon at Oxford Economics.

IHS Markit said the survey was indicative of the euro zone economy growing around 0.5-0.6 percent this quarter. A Reuters poll last month pegged growth at 0.6 percent, faster than the official flash first quarter estimate of 0.4 percent.

But forward-looking indicators suggested more momentum may be lost. While backlogs of work were again accrued, firms did so at a slower rate and this meant an index measuring optimism fell to a five-month low of 65.7 from 66.3.

Composite PMIs for Germany, Italy and Spain all fell from March readings while France’s held steady.

An earlier flash PMI covering the bloc’s dominant service industry suggested activity there picked up but the final reading showed a fall to 54.7 last month from March’s 54.9. The preliminary estimate was 55.0.

April’s slowdown came despite service firms raising prices at a shallower rate - the output price index fell to a seven-month low of 51.8 from 52.1.

Official flash data on Thursday showed April inflation unexpectedly slipped to an annual 1.2 percent in the bloc as prices of services increased at a slower pace. The ECB wants inflation at just below 2 percent.

ECB policymakers have been debating whether to end the central bank’s 2.55 trillion euro ($3.1 trillion) asset purchase scheme but evidence of weakening inflation after a string of downbeat data could make it more difficult for them to curb stimulus.

“For the ECB to be confident and end quantitative easing this year and terminate the asset purchase program we do need to see core inflation pick up,” Nixon said.