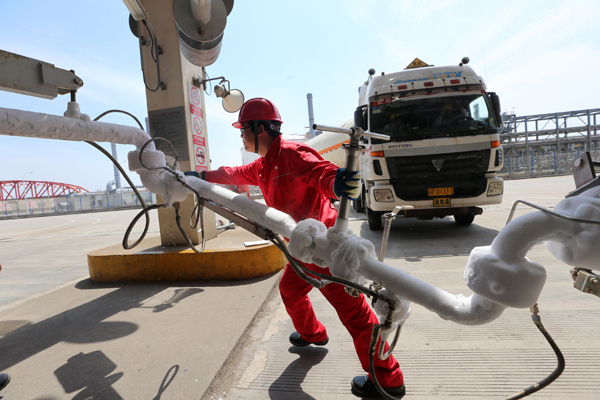 An employee shifts the LNG pipeline after filling the transport vehicle at the CNPC LNG center in Jiangsu province. (Photo: Xu Congjun/China Daily)

China's energy giants are stepping up efforts to boost natural gas supplies with winter approaching, as demand has seen sharp increases in North China during the colder months.

China National Petroleum Corp (CNPC), one of China's top three oil giants, said it has filled 97.8 percent of its Dagang oilfield natural gas storage cluster and is expected to have the cluster fully filled by the end of this month to ensure natural gas demand in the Beijing-Tianjin-Hebei region.

Consisting of 10 gas storage facilities, the Dagang oilfield gas storage cluster has been in operation for almost 20 years, with an accumulated gas storage capacity up to 28.4 billion cubic meters, it said.

The country's energy majors have been ramping up output to ensure sufficient gas supply. CNPC, the country's largest natural gas supplier and operator, has been giving priority to residential gas and guaranteeing industrial gas in key areas, expanding upstream gas production and enhancing capacity for transportation and distribution to help northern regions fight the winter chill.

"On the other hand, CNPC and Sinopec are pumping up their gas storage facilities before the winter, which has played a key role in balancing the seasonal and regional gas consumption imbalance."

The company's total gas storage at its Wen-23 underground storage facility-built from a depleted gas field in Henan province-reached 6.16 billion cubic meters, with an effective working capacity of 1 billion cubic meters. The facility will largely meet gas demand from Beijing and Tianjin as well as the provinces of Hebei, Shandong, Henan and Shanxi, it said.