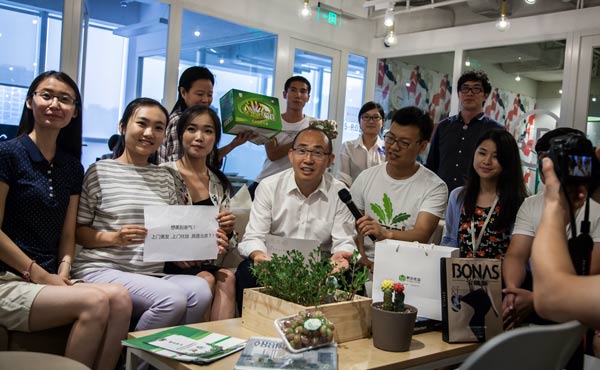 Pan Shiyi (center), chairman of Soho China Ltd, poses for a photo with startup tenants at one of his office buildings in Beijing. (Photo: Provided to China Daily)

Chinese co-working space market has shifted from rapid expansion to products upgrading and enhanced management after frequent mergers and acquisitions by major operators this year, a report said.

Just like other industries related to sharing economy, smaller co-working space companies were acquired by bigger ones, where competition has focused more on quality of services and operation, according to a report released by domestic online-to-offline commercial real estate service platform Haozu.com and China Real Estate Chamber of Commerce on Tuesday.

Since 2015, when the country began to promote innovation and entrepreneurship, co-working space, with lower cost, flexible management and diverse services, showed a steady and rapid development.

However, from 2017 to 2018, there were at least eight M&A in the market, suggesting the competition is becoming fiercer.

Among the top 20 brands (valued in terms of business scale, market influence and performance, financing and M&A), four were purchased by Chinese co-working space unicorn Ucommune--Hongtai New Space, Wujie Space, Wedo Union and Workingdom this year, according to the report.

After that, the market value of Ucommune was estimated to reach 11 billion yuan ($1.75 billion) with 160 operations globally, attracting more than 6,000 enterprises.

Whether a company can find an ideal solution to make profit was the key to compete in the market, the report said.

According to the report, market scale of Chinese co-working space industry reached about 9 billion yuan last year, which is expected to hit 100 billion yuan by 2030 with an annual growth rate up to 50 percent.

And the top 30 companies will occupy more than 70 percent of market share in the future, it said.