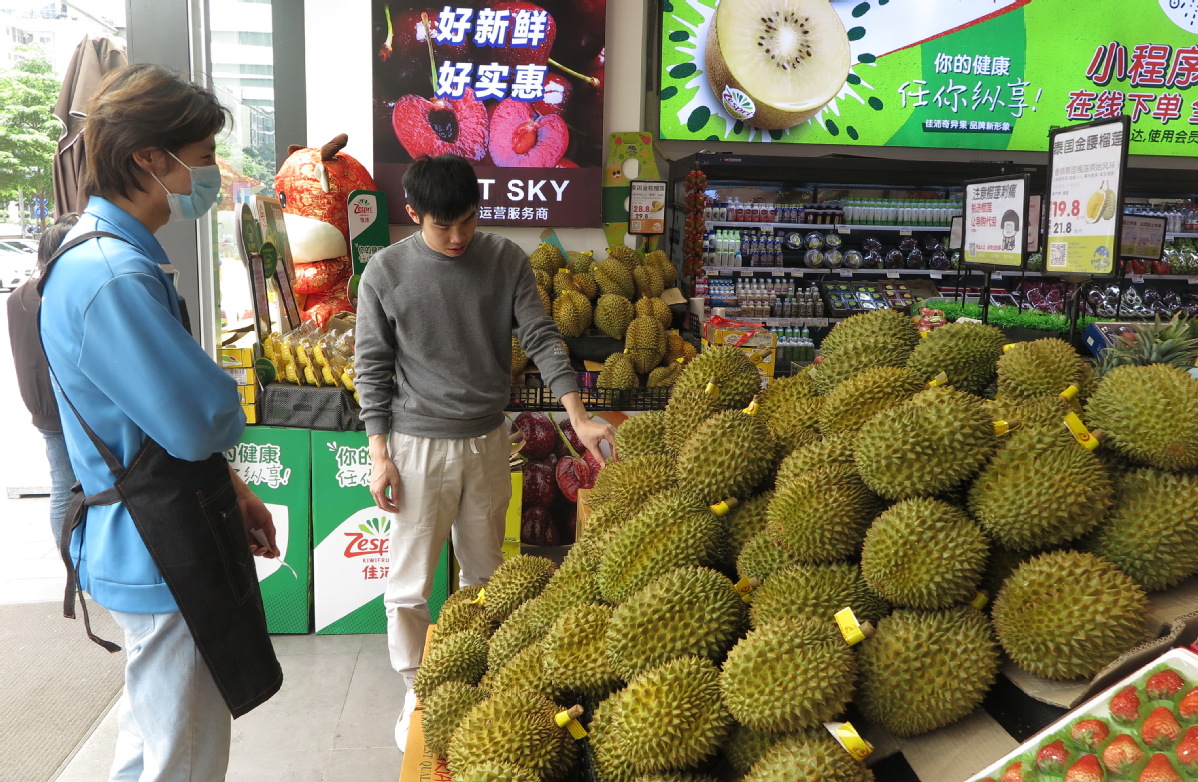 A consumer (right) checks out imported durian at a fruit store in Nanning, Guangxi Zhuang autonomous region, in April. [Photo/Xinhua]

NANNING — As a coconut lover, Zhuang Yong uses a variety of ways to buy his imported Thai coconuts, including daily shopping at brick-and-mortar shops, online purchasing and exhibition sales.

"The taste of the coconuts is fresh and sweet," said Zhuang, a resident of Nanning, capital of South China's Guangxi Zhuang autonomous region.

In recent years, coconuts from Southeast Asian countries have rapidly gained popularity in China and are widely used in foods and drinks, such as cakes, coffee and even hotpot. Various coconut products have enriched the taste buds of Chinese consumers while offering new opportunities for companies.

In the cold storage section of a fruit wholesale market in Nanning, coconuts from Thailand are neatly lined up and will soon go to restaurants, beverage stands, supermarkets and consumers all over the country.

"In Thailand, after being picked, the coconuts are sorted and packaged by local factories and then shipped to China," said Mo Jiaming, deputy manager of a trading company in Guangxi. Mo added that they had visited Thailand many times and had already signed cooperation agreements with Thai factories to ensure the coconut supply.

Livestreaming on Chinese e-commerce platforms has become an important method for fruit merchants to expand their sales channels.

Online sales of coconuts from Southeast Asia are booming. "In the past, we needed to drill a hole in the coconut with a knife to drink fresh coconut water, which was laborious and dangerous. Now, with the easy-opening tool fixed on the coconut, drinking coconut water has become more convenient," Mo said.

"I usually have coconut chicken hotpot with my family and friends every month. On the months we don't have it, I miss it," said Lu Shuai, a Nanning resident, adding that the ingredients in the hotpot are very fresh. Under the concept of consumption upgrading and healthy dining, coconut chicken hotpot perfectly meets the needs of consumers. At the same time, a series of coconut products like coconut milk, coconut jelly and coconut ice cream also cater to consumers' various needs.

With the rising popularity of fresh coconuts and the increasing variety of coconut products, demand for Southeast Asian coconuts in China continues to expand. Mo said that the company's total imports of coconuts from Thailand are expected to exceed 28,000 containers this year, and the average annual growth rate reached about 10 percent in recent years. He believes that in the future, the total amount of coconut imports will continue to increase.

According to statistics from China Customs, from January to July this year, China imported 566,000 metric tons of coconuts, an increase of 35.3 percent compared with 418,000 tons in the same period last year. From the perspective of exporters, coconuts exported to China during the first seven months this year were mainly from Thailand, Indonesia and Vietnam, accounting for 48.6 percent, 32.5 percent and 18.4 percent, respectively.

Thanks to the construction of the New International Land-Sea Trade Corridor — a trade and logistics passage — and the implementation of the Regional Comprehensive Economic Partnership agreement, regional transportation has improved and regional logistics have continued to run smoothly.

Many logistics options are available for fruit transportation from ASEAN countries to China, including road and rail, as well as sea and air transportation, and multimodal transportation can also be customized according to different needs.

Wanlada Ratanapanich, the commercial consul of the Royal Thai Consulate-General in Nanning, said that Thai coconuts rank high in the total amount of imported Thai fruits to China. China's consumer market is large and in high demand, with broad prospects for the future. Thai companies must focus on the continuous optimization and diversification of Thai coconut products and take advantage of livestreaming, Chinese festivals, Thailand shopping carnivals and other promotional activities to attract consumer attention.