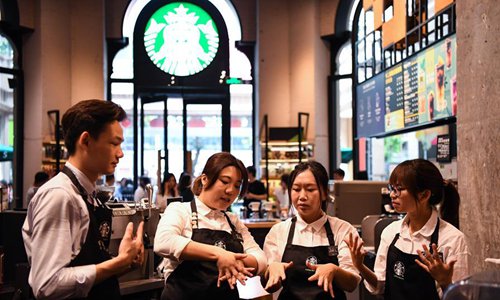 Amid the coronavirus epidemic, café chains have found their business severely battered with steadily rising losses that could last for a longer period.

Industry insiders said that due to the COVID-19 outbreak, major coffee brands such as Starbucks, Luckin Coffee and Costa may see their revenues fall by more than 50 percent in the Chinese mainland from January to February.

Compared with other more demanding needs, the needs for coffee and milk tea products is much less than before, said Zhao Jingqiao, director of the Service Economy and Catering Industry Research Center under the Chinese Academy of Social Sciences.

"The outbreak has definitely had a big impact on the coffee business, but the overall impact depends on the resumption of work and the control of the outbreak," he said.

Zhao said that the impact will last for a much longer period. "If work resumes in March, they won't be back to normal until May or June. After all, the resumption of work in some cities would still be subject to the premise of preventing and controlling the epidemic," he said.

A customer service representative of Luckin Coffee said on Sunday that many stores remain closed due to the epidemic and even though some stores remain open, the services are mostly for takeaway and the service hours are shortened. "Because coffee is not a necessity at present, the government does not support an early opening," aid the representative.

In a statement that Starbucks sent to the Global Times on Sunday, they said that Starbucks stores in other parts of the country are gradually resuming operations, with the exception of stores in Hubei Province, the epicenter of the virus.

In order to keep the business running smoothly, Starbucks has launched a series of protective measures including all ready-to-drink beverages that are prepared in a "level 1 protected" environment.

Meanwhile, staff should take their temperature before starting work. All customers entering the store should wear masks and take their temperature at the door. Customers can order at a distance of one meter from their partners to ensure that a safe distance is maintained. In addition, the corresponding express delivery service is also upgraded online to cater to the majority of customers at home.

"The current situation would bring about changes to their business model in the future that instead of leaning heavily on offline stores with high costs, they might want to shift more services online," Zhao said.

However, despite the business adjustment that has been taken, the epidemic is still becoming a growing pain for the coffee chain industry.

A customer service representative of Costa said on Sunday that stores are reopened but with limited products being offered.

"We have enough coffee beans restored, but given the supply chain issues, some products are not available due to the needs of certain sauces," she said.

Liu Biao, secretary-general of the Specialty Coffee Society of Yunnan, told the Global Times that in addition to declining customers at the stores, disrupted supply chains by the outbreak caused much uncertainty to the coffee shops nationwide.

"At present, it is just the time to collect coffee beans, and now there are still some coffee beans that have not been harvested on the trees due to the outbreak," Liu said. "Transportation has been pulled out because of road closures and the whole coffee supply chain has been delayed."

Liu predicated that coffee shops sales nationwide will drop by a quarter over the course of the year. "Given the current situation, the negative effects could last until April," he said.