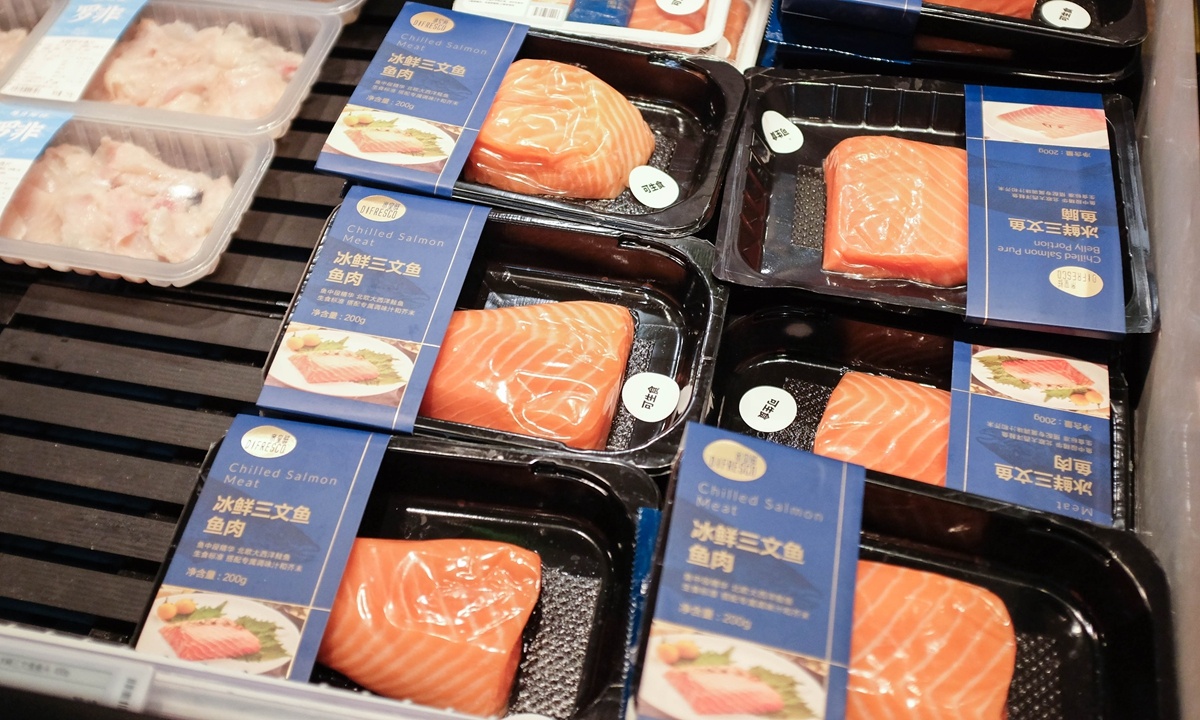 Norwegian salmon sold at a supermarket in China. (Photo: Courtesy of the Norwegian Seafood Council)

China's imported cold-chain food industry, once a center of attention over repeated COVID-19 cases, is bouncing back after a surge of consumption during and after the Chinese Spring Festival.

Salmon from Norway and cherries from Chile are popular once again, another example of how the country's market is recovering.

For example, an employee of fresh-food chain brand Hema Fresh said on Wednesday that salmon from Norway is more popular now. A customer service staffer at online fresh food retailer Zhangxian Shenghuo said that dozens of whole fish are sold every day. In late 2020, there were hardly any sales on some days.

Norway exported 21,867 tons of seafood to China worth 584 million kronor ($68.7 million) so far this year, Victoria Braathen, director for the Chinese mainland and Hong Kong at the Norwegian Seafood Council, told the Global Times on Wednesday.

Following a steady recovery during the autumn, salmon sales grew strongly in the Chinese New Year, said Braathen, a very welcome development that reflects the underlying appetite for Norwegian salmon among consumers.

Imported cold-chain food came under close scrutiny following rising numbers of reported COVID-19 cases since June 2020, when the novel coronavirus was detected on a chopping board used by a vendor of imported salmon at the Xinfadi market in Beijing.

With strict epidemic control and testing measures in place by the customs and local health authorities, such imported cases have largely been curbed and market confidence restored.

Liu Hongyun, a seafood trader based in Qingdao, East China's Shandong Province, told the Global Times that prawn imports from Canada increased by 30 percent in February and March, compared with last December, when sales were just one-tenth of those before the outbreak.

Salmon sales are back up to 50 percent of pre-epidemic levels, Weng Qiang, a purchasing manager at Sunkfa Holding Group, a leading Beijing-based seafood company, also told the Global Times on Wednesday.

Importers are posting information so customers can trace the certification of cold-chain food, Weng said. Sunkfa's imported salmon is mostly sold to restaurants and some supermarkets.

However, salmon and some other imported cold-chain seafood products such as prawn and crabs have yet to return to the shelves at large supermarkets in Beijing.

A source with local supermarket chain Wumart told the Global Times that cold-chain seafood remains a sensitive product and the retailer has yet to decide when to resume sales.

Importers also face long waiting times for sterilization at some ports - sometimes up to one month - and low profit margins due to the high inventory in the market.

Seafood remains an inherent part of the daily menu in China, said Braathen, forecasting that demand for seafood from Norway will continue to recover and grow.

Other food importers also have high expectations for the Chinese market.

Some imported cherry dealers told the Global Times they are now trying to make up for losses caused by COVID-19.

"The pandemic dealt a heavy blow in the cherry industry. Many people I know went bankrupt. But there are always profits and losses in business. I hope that the pandemic can be controlled this year, and as long as Chinese people still love imported cherries, there is an opportunity," an imported cherry dealer surnamed Zhou told the Global Times.

Because of strict precautions that are still in place, consumers' confidence is rising, which is reflected in the sales rebound, said Zhao Jingqiao, director of the Service Economy and Catering Industry Research Center under the Chinese Academy of Social Sciences.

"With inoculation proceeding around the world, the pressure on the imported cold-chain sector will ease, and domestic demand for high-end cold-chain food will return to normal," said Zhao.