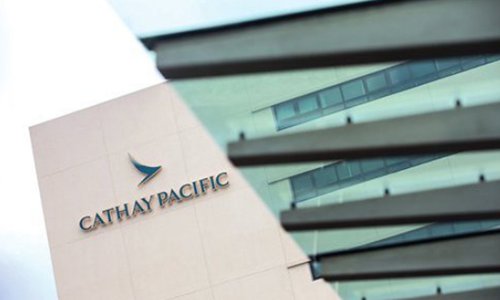 The Cathay Pacific Airways logo is displayed atop a building at Cathay Pacific, the company's headquarters, in Hong Kong in August, 2018. (Photo:VCG)

Airlines in the Hong Kong Special Administrative Region (HKSAR) are cutting flights and capacity to tackle with the declining demand of the city's aviation industry brought about by months of unrest, while neighboring Shenzhen, South China's Guangdong Province, has been expanding international flights to meet surging transport demand.

Experts on Sunday noted that the stability of society as well as economic growth constitute the basis of the development of the aviation industry, and the city's restoration of order is the premise for Hong Kong's aviation industry to resume its leading position in the world.

Hong Kong Airlines announced on Friday that it will cease flights to Canada's Vancouver, Vietnam's Ho Chi Minh City and North China's Tianjin Municipality -- the second time for the airline to suspend long-distance flights within one month. It announced on November 4 that it would end flights to Los Angeles, starting from February 8, 2020.

The continuous unrest has cast a shadow on Hong Kong's business environment, and the company will focus on primary air routes and reduce flights and capacity in the following months, read the statement of Hong Kong Airlines on Friday. It noted that weak demand in the tourism sector would affect the operations and income of the airline.

Another Hong Kong-based airline, Cathay Pacific, recorded decreases in passengers and cargo transport in October. The company carried about 2.74 million passengers in October, a drop of 7.1 percent year-on-year, read a statement sent to the Global Times by Cathay Pacific.

The airline reduced its passenger flight capacity by 2-4 percent between August and October, and by 6-7 percent for November and December, according to the statement.

Cathay Pacific drew criticism from netizens in the Chinese mainland due to its ambiguous attitude toward Hong Kong rioters when the radical protests burst out, and some of its employees reportedly supported the rioters. Chinese mainland netizens even called for a boycott of the airline.

"A certain degree of business contraction is reasonable for Hong Kong airlines, given that the city has not completely restored order," Wu Minghua, a veteran transport industry analyst, told the Global Times.

Stable economic growth is another essential basis for the development of the aviation industry, Wu said, noting that the mounting downward pressure on Hong Kong's economy is another negative factor.

It may take a long time for the industry to resume its former scale and market share, Wu noted.

By contrast, Shenzhen announced that, after eight new international routes launched this year, it will roll out more international flights in the near future. The Shenzhen International Airport's annual international passenger capacity will exceed 5 million for the first time, said a statement on the news site of the Shenzhen government, sz.gov.cn.