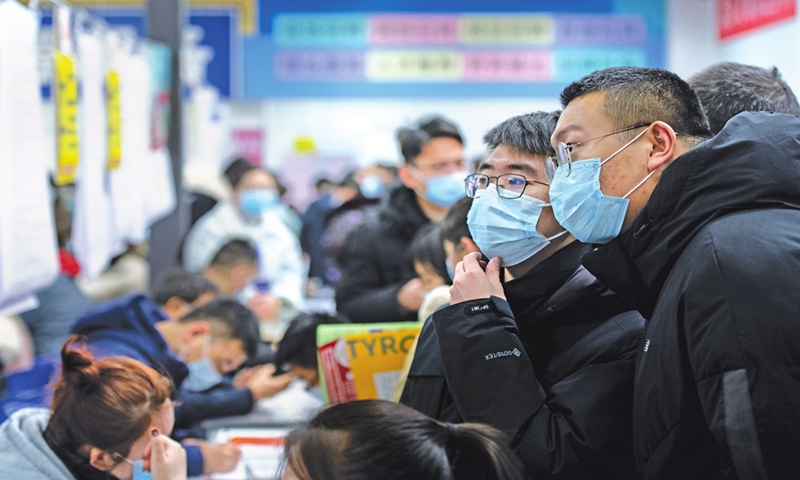 "I am paying close attention to the employment situation in 2022, as I am graduating next year," a third-year university student based in East China's Jiangxi Province surnamed Niu expressed his concern regarding the current job market, in an interview with the Global Times on Wednesday.

Niu's concerns came as the number of graduates in 2022 is expected to hit a record high of 10.76 million, exceeding 10 million for the first time and 1.67 million more than 2021, according to the Ministry of Education.

Although the domestic job market is facing increasing pressure due to the ongoing COVID-19 epidemic, authorities in China have been implementing supportive policies in attempt to ease the situation.

A total of 2.85 million new jobs were created in the first quarter of 2022, completing 26 percent of the annual target, Chen Yongjia, an official from the Ministry of Human Resources and Social Security said at a press briefing on Wednesday, emphasizing that the overall recruitment situation remains stable.

Chen noted that the ministry will continue to prioritize and promote the employment of college graduates while working jointly with relevant departments to meet their job seeking needs with strengthened support.

Industry reports and experts said that college graduates in the first quarter are facing growing employment challenge amid the country's battle against the latest Omicron outbreak, and a slowdown in economy.

Job seekers in the first three months of the year faced a markedly more competitive labor market especially with a surge in demand combined with a reduction on the supply side, according to a report jointly conducted by zhaopin.com, one of China's largest online recruitment platforms, and the China Institute for Employment Research (CIER) at Renmin University of China.

Decreased job opportunities were largely the result of localized COVID-19 outbreaks while some enterprises underwent structural transformation, according to the report, adding that the return of more Chinese students from abroad has aggravated competition.

Industry-wise, job vacancies are dropping for some previous popular choices following tightened regulation on off-campus tutoring and recent layoffs by a few internet giants, according to zhaopin.com.

Moving forward, how the labor market would evolve in the coming months is uncertain and will in large part depend on domestic epidemic control and the global situation, Zeng Xiangquan, director of CIER said on Tuesday.

At the press conference on Wednesday, Chen stressed that the ministry will implement a range of measures targeting four aspects including expanding recruitment channels, enhancing the promotion of available occupations to graduates, while strengthening support to provide more internship opportunities and assisting students who need additional help.

The Ministry of Human Resources and Social Security has already started a campaign to offer employment guidance to graduates on campuses across the country, while implementing online events for students affected by the ongoing COVID-19 outbreak. Since March, more than 10,000 events connected to the campaign have been organized, providing information for nearly five million jobs and reaching almost six million graduates.

Meanwhile, analysts noted that jobs demand for some emerging industries such as biomedicine and smart manufacturing have been growing thanks to the country's continuous support.

The long-term development for industries like biomedicine and smart manufacturing will be bright as the central government vowed to support the real economy, and high-tech manufacturing, Mao Yufei, a research fellow at CIER told the Global Times.

Although it would be difficult to make up the current demand gap by solely relying on technology-driven manufacturing industries, the development potential for these industries over the long run will be positive, Li Qiang, executive vice-president of zhaopin.com told the Global Times.

While responsible authorities have been enhancing efforts to support the labor market, domestic recruitment platforms have also been working nonstop in a bid to promote the high-quality employment suited for college graduates.

For instance, Li noted that zhaopin.com has organized multiple online and offline events while offering different services to connect graduates directly with enterprises amid the outbreak in order to alleviate the immediate need for employment.

Experts also stressed the importance of exploring the possibility of setting up a data monitoring system to track national recruitment data.