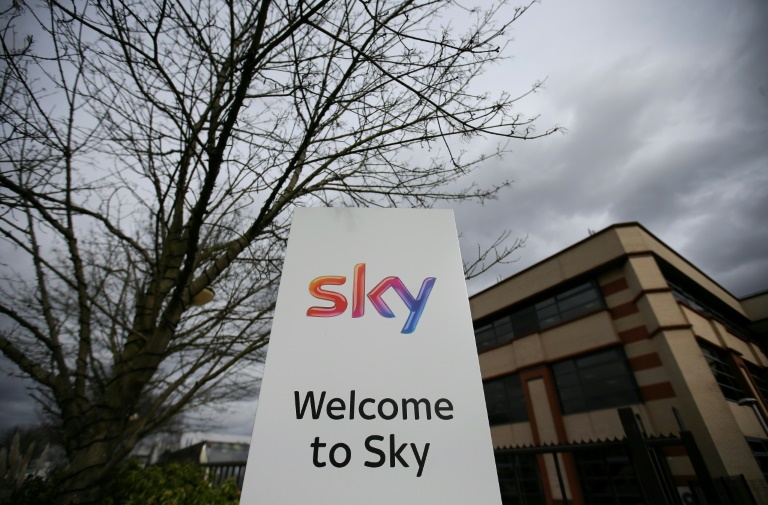 Sky's subscription base of 23 million and rights to English Premier League football make it one of Europe's most profitable and powerful TV companies (Photo: AFP)

US cable giant Comcast outbid Rupert Murdoch's 21st Century Fox in a blind auction for the European TV operator Sky on Saturday that all but settled a titanic battle between the two media empires.

Fox's highest offer was worth £27.6 billion.

The pan-European TV operator's shareholders will have until October 11 to decide which bid to accept.

But Comcast's chief executive Briant Roberts quickly hailed the outcome as "a great day" for his company.

"Sky is a wonderful company with a great platform, tremendous brand, and accomplished management team," he said in a statement.

"This acquisition will allow us to quickly, efficiently and meaningfully increase our customer base and expand internationally."

Sky's subscription base of 23 million and lucrative rights to English Premier League football make it one of Europe's most profitable and powerful TV companies.

The nearly two-year battle for Sky has reshaped the global media-entertainment landscape and put Comcast in pole position to take on emerging online rivals.

The auction pitted two old media behemoths against each other, both needing a way to boost content in order to keep viewers from switching to streaming services such as Netflix.

Saturday's outcome dealt a potentially fatal blow to Murdoch's attempts to acquire the 61 percent stake in Sky he did not already have but has long sought.

The 87-year-old global media mogul has been a dominant presence on the British market since first forming the BSkyB broadcaster in 1990.

Murdoch made his first determined attempt to take over Sky in 2010-11.

That effort was scuttled by pubic uproar over a phone hacking scandal at his British newspaper holdings.

Critics had argued that allowing Murdoch -- who owns major British newspaper titles The Times and The Sun -- full control of Sky News would have given him too much influence in the UK news business.

Fox proposed remedying this by selling the rolling TV news channel to Disney should it win full control of Sky.

The fight over Sky has also altered how Americans get to watch their broadcasts and movies.

Comcast was forced to drop its bid to take over Fox itself because it needed the money to go after Sky.

This allowed Walt Disney Co. to complete a mega-merger with Fox that should close next year.

Saturday's auction thus turned into a proxy battle between Comcast and Disney for Sky.

Comcast viewed Sky as a way to win a foothold in Europe and end its sole dependence on the United States.

And Disney was looking for a way to feed its content directly to viewers without having to rely on cable providers.

Sky offered a way out for both.

The emerging alliances means the coming years might be dominated by offerings from two traditional sources: Disney-Fox and Comcast-Sky.

Comcast's holdings already include Universal Studios and the US television channels NBC and CNBC.

Disney's empire stretches from its film studio and theme parks to the US television network ABC and the various ESPN sport channels.

But Sky shareholders still have the option of backing the Disney-Fox offer.

And the Disney-Fox alliance must still clear some regulatory hurdles.