Comcast seeks to outfox Murdoch with higher bid for Sky 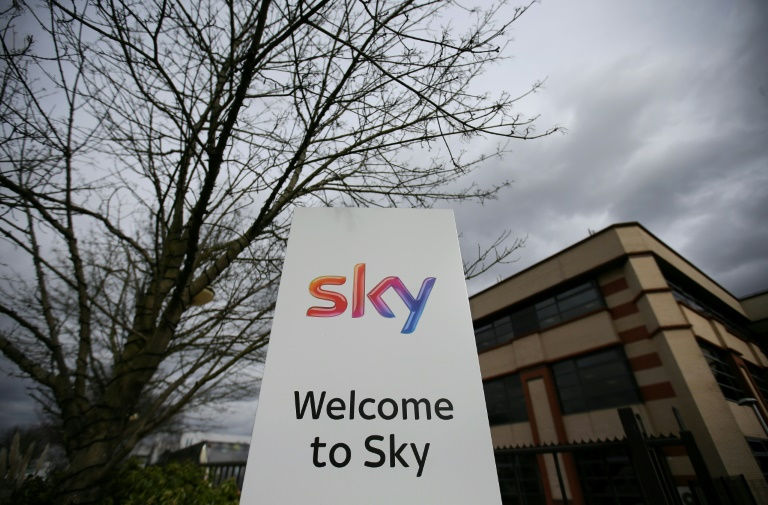 In a surprise announcement before the London stock market opened, Comcast presented an informal all-cash offer of £12.50 per share for Sky, or more than £22 billion ($31 billion, 25 billion euros) overall.

That is substantially more than the £10.75 per share or £11.4 billion that Fox has offered for the 61 percent of Sky it does not already own.

The announcement -- and the prospect of a bidding war -- sent Sky's share price soaring 21 percent on the London Stock Exchange.

"We would like to own the whole of Sky and we will be looking to acquire over 50 percent of the Sky shares," said Comcast chief executive and chairman Brian L. Roberts.

"We are confident that we will be able to receive the necessary regulatory approvals."

In a brief response, Sky advised shareholders to take no action in the absence of a formal bid.

"Sky is a prized asset for Murdoch so this could quickly escalate into a bidding war," said London Capital Group analyst Jasper Lawler.

The new twist comes after Britain's competition regulator provisionally ruled that Fox's offer was "not in the public interest".

In 2016, 21st Century Fox bid for the nearly two-thirds of Sky it does not own -- but a full-takeover had been held up by UK government concerns.

In an effort to get its offer over the line, Fox earlier this month vowed to preserve the editorial independence of Sky News.

That came after Britain's top competition regulator ruled that the Sky takeover was not in the public interest because of media plurality concerns.

Adding to the uncertainty about Sky's future ownership, Disney announced in December a $52.4-billion deal to buy 21st Century Fox. Including debt, the deal is worth $66.1 billion.

And Comcast, which in December dropped an attempt to acquire 21st Century Fox, is considering relaunching that bid, according to a recent Wall Street Journal report.

Speaking of Sky on Tuesday, Comcast CEO Roberts said: "We think Sky is an outstanding company. It has 23 million customers, leading positions in the UK, Italy and Germany, and is a consistent innovator in its use of technology to deliver its customers a great experience."

And in a thumbs up to Britain amid Brexit uncertainty, he added: "The UK is and will remain a great place to do business. We already have a strong presence in London and Comcast intends to use Sky as a platform for our growth in Europe.

"We intend to maintain and enhance Sky's business," Roberts said.

In response to the Comcast bid, Sky's share price surged to £13.37 on London's benchmark FTSE 100 index, which was flat overall in afternoon trading.

"Comcast's approach for Sky is a fascinating development in the battle for media might," said Richard Hunter, head of markets at Interactive Investor.

"The deal would have attractions on a number of fronts, not least of which would be the removal of complexity from the current tripartite discussions between Fox, Disney and Sky."

If successful, Comcast said it "intends to maintain Sky News' existing brand and culture, as well as its strong track record for high-quality impartial news and adherence to broadcasting standards".

Comcast added that it did not believe its offer "should create any media plurality concerns in the UK".

Sky is well known also for its coverage of live English Premier League (EPL) football and earlier this month it retained its position as the main broadcaster of EPL matches by winning a majority of television rights for 2019-22 matches in a multi-billion-pound deal.