Coming of the smart port era 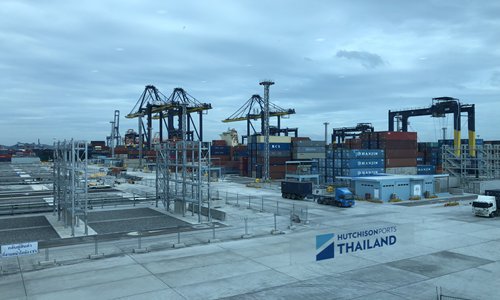 A view of the automated Laew Chabang Port in Thailand on Thursday (Photo: Global Times)

Amid a slowing port industry due to the growing anti-globalization factor in the international community, global port operators are ramping up efforts to promote the smart transformation, which could address some problems traditional ports are facing now. Shanghai Zhenhua Heavy Industries Co (ZPMC), the world's largest manufacturer of port machinery, is struggling to provide different smart solutions to its customers, in a bid to gain a stronger foothold in the coming smart port era.At the autonomous container yard of the Laem Chabang Port, an unmanned crane is accurately stretching out to a container carried by a truck and putting it beside the many containers already piled at the yard block. This is just one of the daily scenarios in the Laem Chabang Port, which is located 130 kilometers to the south of Bangkok and also the largest port in Thailand, supported by the autonomous system developed by Chinese State-owned Shanghai Zhenhua Heavy Industries Co (ZPMC).With the new smart system, all Terminal D quay and yard cranes at the port can be operated by the advanced remote control technology.Jiang Hao, assistant general manager of the R&D center at ZPMC, told the Global Times on Thursday that the port is also the world's first fully automated yard block of ZPMC, which utilizes the automated rubber tired gantry (ARTG) for automated operation in the yard. "Currently, prompted by the fast development of advanced technology including artificial intelligence (AI) and autonomous driving, port operators around the world are ramping up efforts to catch up with the coming smart era," Zhang Jian, vice president of ZPMC, told a port industry forum held in Bangkok on Thursday.While Zhang cautioned that the transformation is more urgent now with the growing anti-globalization elements in the global market, which have brought some negative impacts to the growth of the global port industry."The golden era that has witnessed the fast development of the port industry has already gone; global ports operators are facing critical situations in making profits. Against this backdrop, transformation and innovation have become the consensus and a necessary move for ports all over the world," Zhang noted.Smart transformationAmid the fast development of smart transformation, ZPMC, the world's largest port machinery maker in terms of market share, has been stepping up efforts to develop and testing new smart solutions for port operators around world, in a bid to gain an earlier foothold in this trend. Apart from the latest smart port solutions used in the Laem Chabang Port, ZPMC also launched its intelligent container truck system on Wednesday, which could achieve a full automation of inner container trucks."The smart transformation of ports could greatly cut the number of workers needed at the site, thus the cost for that port might be reduced," Hu Zhongwang, straddle carrier R&D manager of ZPMC's port machinery group, told the Global Times on Wednesday, adding that a truck driver's annual salary in Europe could reach as much as 1 million yuan ($143,740).Wang Zhiqiang, manager of the production dispatching department of Jingtang Port, said that the automated terminal could also reduce work safety risks for drivers and increase handling efficiency."When manually driven trucks work in terminals, drivers will encounter many hazards and frequent interaction with cranes in a noisy environment. And truck drivers need to work during the night under high intensity, which can cause problems such as fatigue and the lack of concentration. These issues also increase the probability of incidents," Wang said.ZPMC strengthIndustry players told the Global Times on Thursday that ZPMC has an advantage in leading the coming smart port era, but also faces strong competition in the industry.The phase 4 of the Shanghai Yangshan Deep Water Port, supported by ZPMC's smart solution system, is now the world's biggest automated container terminal, and the phase 4 was put into operation in December 2017. "The biggest advantage ZPMC has is its absolute leadership in the crane manufacturing industry, and it's creating a quite complete smart port solution," an industry insider, also a customer of ZPMC, told the Global Times on Thursday. The person asked to remain anonymous since he is not allowed to speak to the media.According to the company's website, ZPMC's quayside container cranes and rubber-tired gantry cranes have a 70 percent world market share, and has remained to be the largest port machinery makers for 11 consecutive years."With the company's overwhelming share, people would prefer to adopt ZPMC's smart port solutions, especially when building a new port, since they will consider buying port equipment from ZPMC anyway," the insider explained, but mentioned that when it comes to the upgrading of traditional ports, ZPMC might face challenges from its counterparts. One strong competitor is Finnish company Konecranes, a smart port solutions provider, which introduced the new generation of its ARTG system on October 31. Konecranes was the first company to develop an ARTG system on a wide commercial scale, according to a company statement.Angelo de Jong, chief technology officer of the United Arab Emirates-based Abu Dhabi Terminals, who has cooperated with ZPMC since 2004, told the Global Times on Thursday that his company signed an equipment purchasing contract with ZPMC recently for port expansion projects. However, for the detailed plans on upgrading the port, he can't make a final decision in the short run. "I'm now comparing solutions provided by ZPMC and other companies," he said, adding that ZPMC has a price advantage.Despite a fierce competition, Zhu Lianyu, chairman of ZPMC, stressed the significance of cooperation and globalization at the preliminary stages of constructing smart ports."It's important for us to jointly promote the construction of global port terminals and establish an international standard for the technology of port equipment," Zhu said at the forum.In the future, it is even possible that an operator could just stay in one country, while controlling different ports remotely across the world, said Wang Chen, a market specialist of ZPMC electric group.