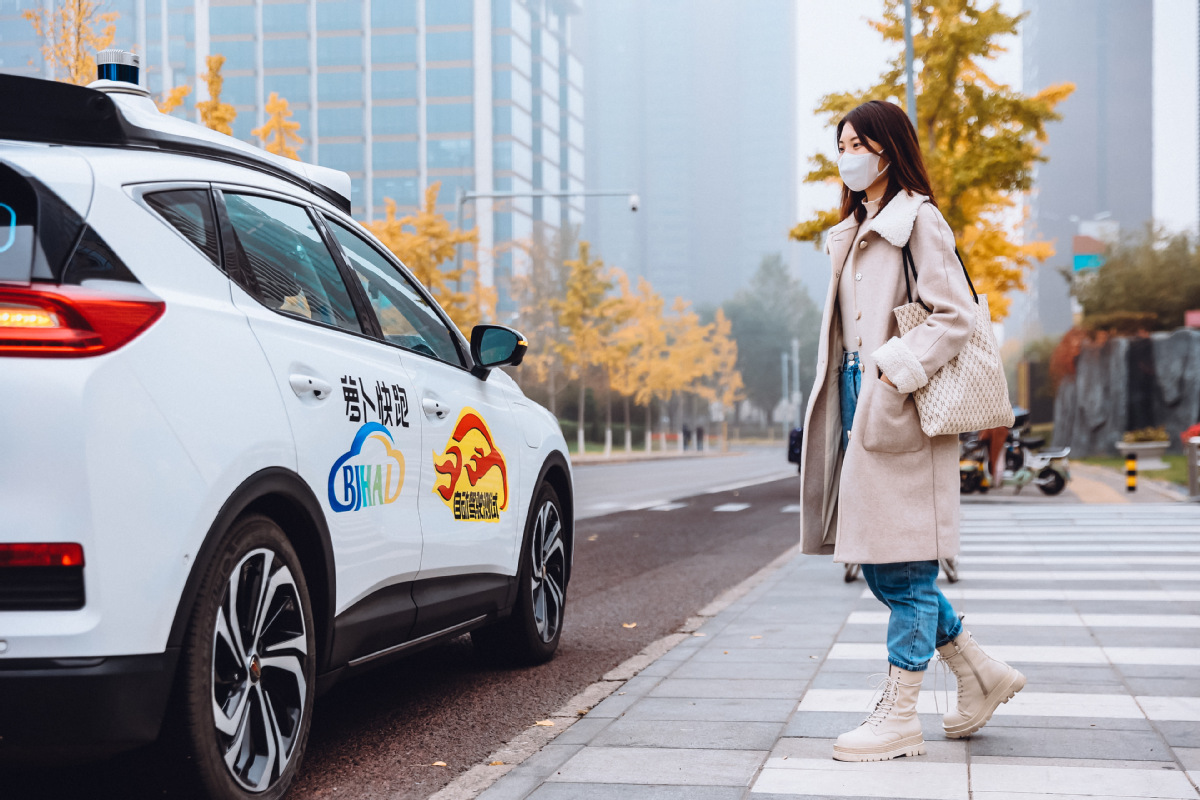 Tech giant Baidu Inc and self-driving startup Pony.ai are the first pair of enterprises granted permission to offer paid services and provide up to 100 self-driving vehicles for commercial pilot services within an area of 60 square kilometers in the Beijing Economic and Technological Development Zone.

According to the head office of the Beijing High-level Automated Driving Demonstration Area, autonomous driving service providers can adopt market-based pricing mechanisms and start charging for their services on the premise of clarifying charging principles and payment methods to passengers.

The service provided by Baidu's Apollo Go includes over 600 pickup and drop-off points in both commercial and residential areas, Baidu said.

Covering a total of 350 kilometers of roads, the service is available every day of the week from 7 am to 10 pm. By using the Apollo Go app, qualified users can locate one of a total of 67 autonomous cars in the vicinity and hail a ride by themselves.

Baidu's autonomous driving capabilities have made rapid progress in recent months. Its robotaxi services have provided 115,000 rides in the third quarter, making Baidu the largest robotaxi service provider globally. The company plans to expand Apollo Go services to 65 cities in 2025, and 100 cities in 2030.

Toyota-backed Pony.ai said about 200 sites are covered by its robotaxi service and passengers can pay for rides via Alipay or WeChat Pay.

"The move is of great significance in further accelerating the large-scale commercialization of autonomous driving technology nationwide," said Zhang Xiang, a researcher at the Automobile Industry Innovation Research Center, which is part of North China University of Technology in Beijing.

Beijing is taking the lead in bolstering the development of commercialized autonomous driving across the nation, Zhang said, adding other first-tier cities, such as Shanghai and Guangdong province's Guangzhou and Shenzhen might open similar commercial pilots for self-driving services soon.

He added that the number of autonomous cars and the area of operation are expected to expand so as to meet the needs of consumers.

As autonomous driving technology continues to mature, the sector is poised to witness robust growth in the coming years. The market size of China's self-driving taxi services is expected to surpass 1.3 trillion yuan ($203.5 billion) by 2030, accounting for 60 percent of the country's ride-hailing market by then, said a report by global consultancy IHS Markit.

The report said the robotaxi market will eventually be dominated by two to three major service providers, with the top providers occupying more than 40 percent of the total market share.

Yang Diange, a professor from the School of Vehicle and Mobility at Tsinghua University, said the commercial operation of self-driving vehicles will promote the iteration and innovation of technologies, and help enterprises explore reasonable business models, thus allowing autonomous driving technologies to create more value.