Although the global price rise of commodities may peak in August, it will still take time and greater policy support for businesses in China, downstream ones in particular, to swallow the associated cost and get through tough times in their operations, economists and industrial insiders say. 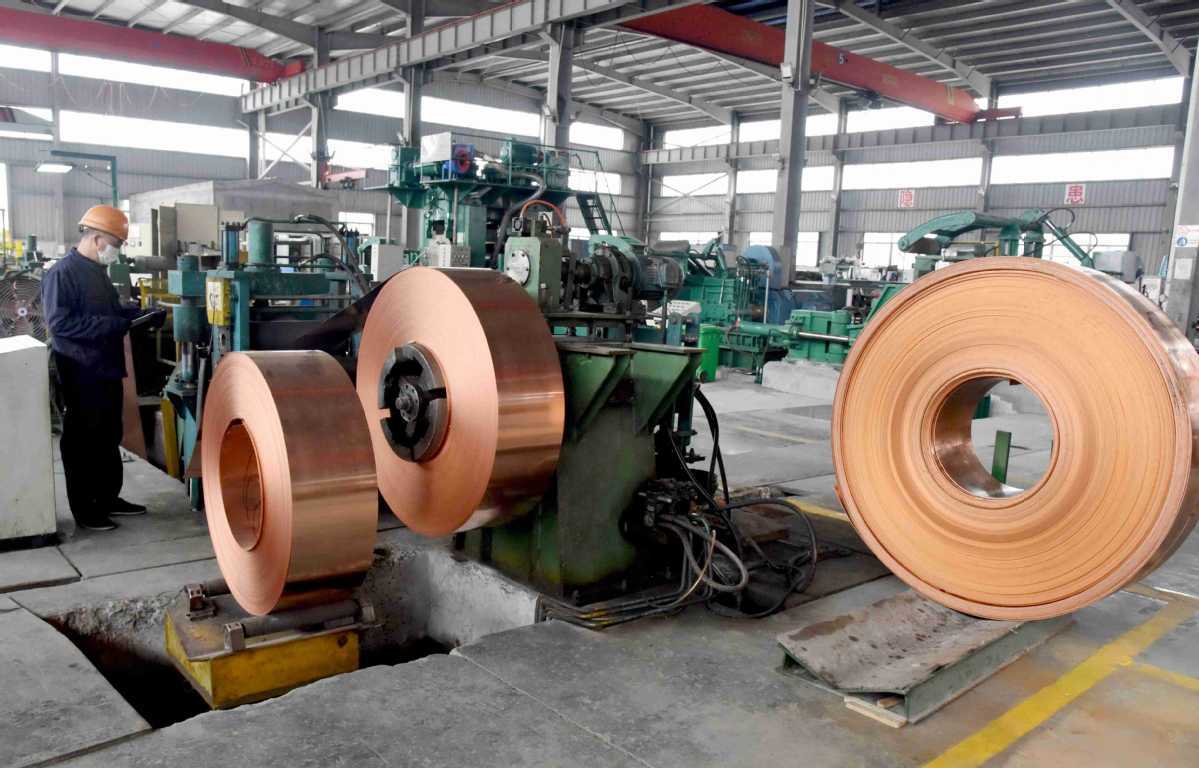 Most economists believe that this round of commodity price rises has been caused by the quantitative easing steps and fiscal stimulus in Western countries, particularly in the United States, and the severely clogged supply and logistic chains for raw materials in recent months, a result of the constantly evolving pandemic situation.

China's PPI expansion started to pick up pace in March, when the sharp rise of global commodity prices started to feed through and hit China's domestic market. The country also saw a PPI annual expansion of 9 percent in May.

Wen Bin, chief researcher at China Minsheng Bank, believes this round of commodity price rises is close to its peak, yet continued efforts are required on the macro policy front to ensure commodity supplies and stable prices. In particular, customized support needs to be in place for small and micro enterprises in specific industries.

In China, the price rises have led to a notable divergence in business operation status across industries. Most State-owned and large enterprises have benefited from the sharp price rises, while smaller and micro businesses particularly in manufacturing are painfully bearing the rising costs.

NBS senior statistician Zhu Hong said in a news release in late July that although industrial profits have been recovering in the first half of the year, their recoveries are still uneven. The profit earning of private, micro businesses is on a slower track of recovery, and the high price of commodities has put a squeeze on downstream businesses.

In a similar vein, Li Ke'aobo, a researcher at the Academic Center for Chinese Economic Practice and Thinking at Tsinghua University, believes the divergence is mainly because China's economic recovery has so far been uneven.

"Smaller and micro businesses mainly cluster in downstream businesses and are mainly at the end of the consumption line. Yet, as the momentum for the country's consumption has not returned to the pre-pandemic level yet, smaller businesses were not able to increase sale prices and pass on such costs to consumers," he said, "While, on the other hand, smaller businesses are barely able to bargain with upstream suppliers on prices. This means they have no option but to factor the rising price into their operation cost."

Li, together with his research team at the Tsinghua think tank, regularly visits and interviews enterprises of different sizes across the country to take a closer look at business operation status. While noticing their suffering, Li said he has also seen the that central government's recent policy moves are taking effect.

Since May, the State Council and the National Development and Reform Commission have been issuing orders to ensure commodity supply and keep their prices stable, including by screening for abnormal transactions and seriously dealing with price speculation and hoarding in accordance with the law.

Dong Lijuan, a senior statistician at the NBS, said these efforts have achieved notable results. Prices of steel and nonferrous metals both dropped in July.

Meanwhile, small and private businesses are making their own efforts to tide through these tough times.

Song Yijia, chairwoman of Jiangsu S&S Intelligent Science and Technology Co Ltd, a private company engaging in high-end weaving equipment and key components, said that with the policy assistance of the local commerce department, the company has modified its container shipping measures and enlarged its rate of container use by 25 percent.

In response to the increase in raw material prices, she said the firm has communicated with suppliers to share part of the cost to form a mechanism for the entire industry chain to bear the risks together.

She said the company is also learning to apply futures market strategies to hedge against sudden fluctuations in prices of raw materials.

The People's Bank of China, China's central bank, pledged in its latest quarterly report that it will work to support the continuous recovery of small and mediumsized businesses as well as industries in difficulties.

Going forward, Li, the Tsinghua researcher, suggests regular financial support should be given to these vulnerable smaller companies. In particular, he suggests more training and consultation on financial knowledge, particularly on futures trading, should be properly provided to these firms to help them cushion the price fluctuations, as most smaller companies tend to lack such knowledge, leaving them more vulnerable to prices changes.