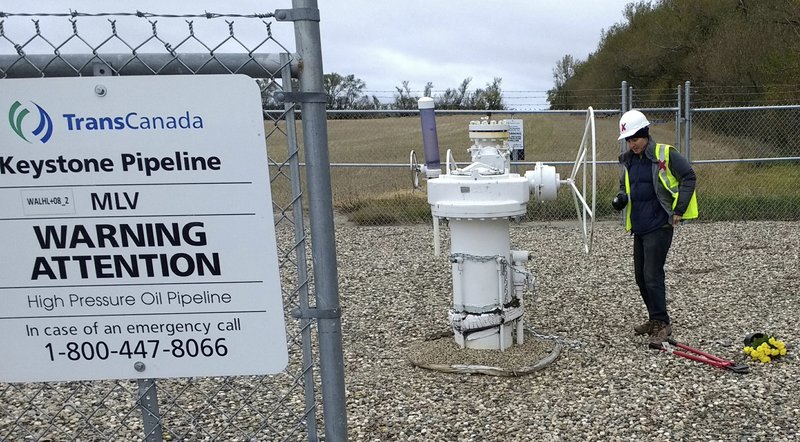 As Enbridge prepared to move climate-damaging tar sands crude through a 40-year-old pipeline in eastern Canada in 2015, environmentalists and indigenous peoples including Vanessa Gray thought about what happened in Michigan just five years earlier: Another of the company’s lines had burst, sending oil into a river in one of the largest spills in US history.

With that in mind, Gray and others decided they needed to do more than just speak out. In December 2015, three activists from Montreal entered Enbridge property near the Quebec-Ontario border and turned an above-ground emergency pipeline shut-off valve. About two weeks later, Gray and two others did the same at a different site, drawing even more attention because authorities levied charges that could have landed them in prison for life.

They ended up with no jail time and accomplished their goal of raising awareness.

“I hope it inspires others,” Gray, 26, a member of an Ojibwe tribe, said in a recent interview.

It already has, by activists in the US who believe fossil fuels are precipitating a global warming crisis. Just last month four activists targeted an Enbridge oil pipeline in northern Minnesota. But pipeline companies say so-called valve turners are dangerous — to themselves and the public — and many energy industry officials and advocates say they should be treated as domestic terrorists. Several states are considering increasing fines and prison terms for such incidents and holding associated organizations legally accountable as well.

To Michael Foster, it’s a wake-up call to a world quickly approaching “a life-or-death moment.”

“We must stop the flow of fossil fuels as a society,” said the mental health counselor from Seattle who spent six months in jail for turning a pipeline shut-off valve in North Dakota in October 2016. “You can argue about the best, or better, ways to do it, but we haven’t done it yet, and we’ve run out of time.”

Foster was part of a loose-knit group of 11 climate change activists who dubbed themselves Climate Direct Action and simultaneously turned shut-off valves on five pipelines in North Dakota, Minnesota, Montana and Washington state that carry Canadian tar sands crude into the US.

In response to that action, federal regulators issued a bulletin warning that tampering with pipeline valves can result in “death, injury, and economic and environmental harm.” None of the valve-turning incidents has led to an injury or a spill, but critics say the protest tactic is at the very least hypocritical.

“What eco-extremists fail to recognize is that their own reckless actions risk seriously harming the same environment that they claim to be trying to protect,” said Craig Stevens, spokesman for Grow America’s Infrastructure Now, a pro-pipeline coalition.

Enbridge spokesman Jesse Semko said tampering with pipelines is no different than targeting railways or power lines, and the company “will support the prosecution of those individuals to the fullest extent of the law.”

But some think the law doesn’t go far enough. The valve-turning protests all have been prosecuted under state laws, and the punishments have varied. No protester other than Foster has spent more than two days in jail.

A group of bipartisan lawmakers, led by Colorado Republican Rep. Ken. Buck, asked the US Justice Department in October 2017 whether protesters could be prosecuted under federal domestic terrorism laws. The response in February 2018 from Assistant Attorney General Stephen Boyd, provided by Buck’s office, didn’t give much clarity. Boyd said pipeline protest incidents “may or may not qualify as ‘domestic terrorism,’” and he wouldn’t comment on whether any federal investigations were happening. The department didn’t respond to an Associated Press request for comment.

Some states aren’t waiting for federal action. The American Legislative Exchange Council has created a model bill that carries stiff penalties for protest incidents targeting “critical infrastructure” such as pipelines. It’s inspired by a 2017 Oklahoma law that carries penalties of up to 10 years in prison and a $100,000 fine.

Louisiana last year passed a law similar to the model, and the legislatures in North Dakota , Illinois, Missouri, Ohio, Mississippi and Indiana are considering similar bills this year, according to Grant Kidwell, the council’s energy policy expert. A proposal in the Wyoming Legislature failed to pass.

The oil and gas industry also is acting. The Energy Equipment and Infrastructure Alliance in October 2017 launched an online database to catalog what it calls attacks on pipelines, including valve-turning.

“I hope it doesn’t spread,” Alliance President and CEO Toby Mack said. “I think it’s pretty obvious that it’s just kind of a stupid way of making a point.”

“The state of the movement for climate justice in the United States is in need of more boldness,” said Jay O’Hara, co-founder of the Climate Disobedience Center.