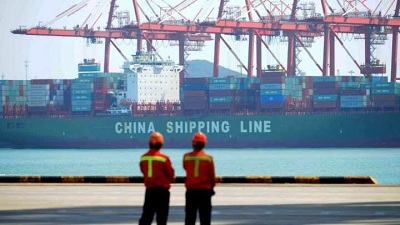 Companies expect booming trade between China and S. Korea ahead of the upcoming annual East Asia Summit in mid-November, which sets to promote regional cooperation.

East China's Shandong Province, the nearest province to S. Korea, has over 5,000 companies funded by the country.

Wang Chao, a sales manager at Weihai ShinHan Precision Co. Ltd, said sales dropped as much as 50 percent in the first half of the year, though fluctuation has been lowered to around 5 percent.

ShinHan produces car parts for Kia vehicles and has been in business China for over 15 years. "As far as I know, sales of some Korean brands almost halved in the second quarter this year, and the dip in sales hurt us," he said. "Now we are back within the normal range, which is a great relief."

Wen Xue, manager of the Qingdao factory of a cable producer headquartered in Busan, said their company has experienced no worrying sales issues, but imports from S. Korea have been not as smooth as before.

"Our company has been doing business here for 13 years. There are down moments, but we hope the up-moment will soon come," he said.

"Most of my colleagues and I are not pessimistic about the prospects because economic ties between the two countries were very close before, and there is a heavy dependence on Chinese products in S. Korea," he said.

This year, sales of S. Korean firm Ceragem Cosmetics have also been slipping.

"There was a period that consumers really liked cosmetics from S. Korea. If I look at our sales for October, and figures are getting better. I hope the Korean brands will continue to win the hearts of Chinese buyers," she said.

"It is in the interest of people in both countries to give a boost to trade. The calls from the public show we need to look forward and make steady progress, and to help companies and the economy grow," said Zhang Weiguo, director of Shandong Academy of Social Sciences Economics Institute.