US oil firm ConocoPhillips has moved to take Caribbean assets of Venezuela’s state-run PDVSA to enforce a $2 billion arbitration award over a decade-oil nationalization of its projects in the South American country, according to three sources familiar with its actions. 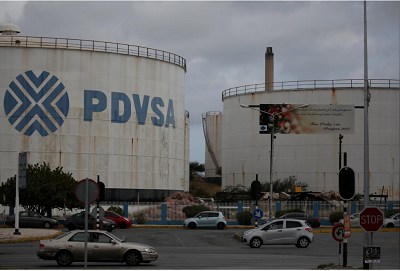 The logo of Venezuelan oil company PDVSA is seen on a tank at Isla refinery in Willemstad on the island of Curacao April 22, 2018. (File Photos: Reuters)

The US firm targeted facilities on the islands of Curacao, Bonaire and St. Eustatius that accounted for about a quarter of Venezuela’s oil exports last year. The three play key roles in processing, storing and blending PDVSA’s oil for export.

The company received court attachments freezing assets at least two of the facilities, and could move to sell them, one of the sources said.

Conoco’s legal maneuvers could further impair PDVSA’s declining oil revenue and the country’s convulsing economy. Venezuela is almost completely dependent on oil exports, which have fallen by a third since its peak and its refineries ran at just 31 percent of capacity in the first quarter.

The Latin American country is in the grip of a deep recession with severe shortages of medicine and food as well as a growing exodus of its people.

PDVSA and the Venezuelan foreign ministry did not respond on Sunday to requests for comment. Dutch authorities said they are assessing the situation on Bonaire.

Conoco’s claims against Venezuela and state-run PDVSA in international courts have totaled $33 billion, the largest by any company.

“Any potential impacts on communities are the result of PDVSA’s illegal expropriation of our assets and its decision to ignore the judgment of the ICC tribunal,” Conoco said in an email to Reuters.

The US firm added it will work with the community and local authorities to address issues that may arise as a result of enforcement actions.

PDVSA has significant assets in the Caribbean. On Bonaire, it owns the 10-million-barrel BOPEC terminal which handles logistics and fuel shipments to customers, particularly in Asia. In Aruba, PDVSA and its unit Citgo lease a refinery and a storage terminal.

On the island of St. Eustatius, it rents storage tanks at the Statia terminal, owned by US NuStar Energy, where over 4 million barrels of Venezuelan crude were retained by court order, according to one of the sources.

NuStar is aware of the order and “assessing our legal and commercial options,” said spokesman Chris Cho. The company does not expect the matter to change its earnings outlook, he said.

Conoco also sought to attach PDVSA inventories on Curacao, home of the 335,000-barrel-per-day Isla refinery and Bullenbay oil terminal. But the order could not immediately be enforced, according to two of the sources. 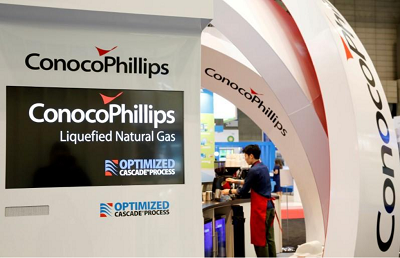 Logos of ConocoPhillips are seen in its booth at Gastech, the world's biggest expo for the gas industry, in Chiba, Japan, April 4, 2017.

Last year, PDVSA’s shipments from Bonaire and St Eustatius terminals accounted for about 10 percent of its total exports, according to internal figures from the state-run company. The exports were mostly crude and fuel oil for Asian customers including ChinaOil, China’s Zhenhua Oil and India’s Reliance Industries.

From its largest Caribbean operations in Curacao, PDVSA shipped 14 percent of its exports last year, including products exported by its Isla refinery to Caribbean islands and crude from its Bullenbay terminal to buyers of Venezuelan crude all over the world.

PDVSA on Friday ordered its oil tankers sailing across the Caribbean to return to Venezuelan waters and await further instructions, according to a document viewed by Reuters. In the last year, several cargoes of Venezuelan crude have been retained or seized in recent years over unpaid freight fees and related debts.

“This is terrible (for PDVSA),” said a source familiar with the court order of attachment. The state-run company “cannot comply with all the committed volume for exports” and the Conoco action imperils its ability to ship fuel oil to China or access inventories to be exported from Bonaire.

At the International Chamber of Commerce (ICC), Conoco had sought up to $22 billion from PDVSA for broken contracts and loss of future profits from two oil producing joint ventures, which were nationalized in 2007 under late Venezuela President Hugo Chavez. The US firm left the country after it could not reach a deal to convert its projects into joint ventures controlled by PDVSA.

A separate arbitration case involving the loss of its Venezuelan assets is before a World Bank tribunal, the International Centre for the Settlement of Investment Disputes.

Exxon Mobil Corp also has brought two separate arbitration claims over the 2007 nationalization of its projects in Venezuela.