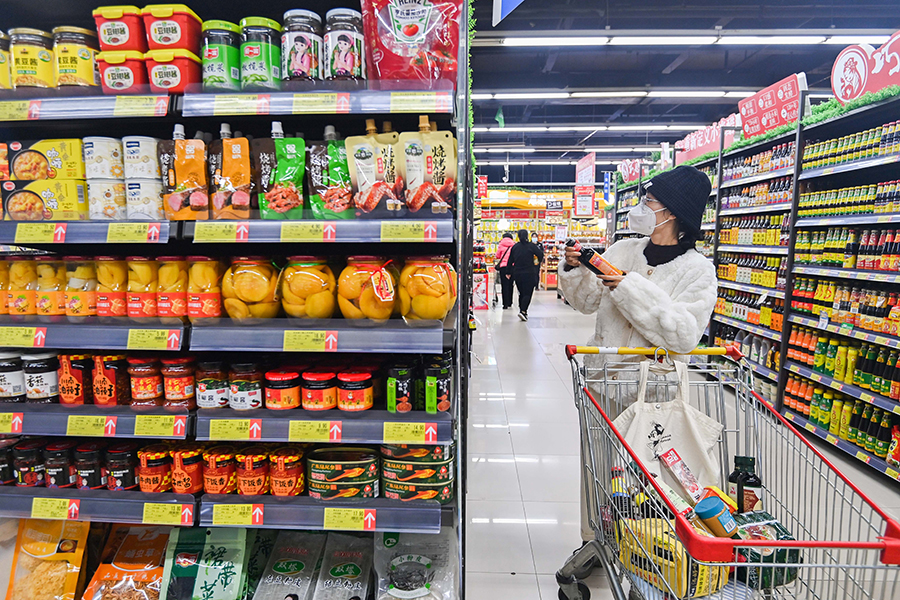 China's consumer inflation eased in November to an eight-month low, providing Beijing with more leeway to shore up the economy at a time when many major economies are grappling with high inflation, experts said.

The country's consumer price index, a main gauge of inflation, rose by 1.6 percent year-on-year in November, down from 2.1 percent in October, the National Bureau of Statistics said on Friday.

The NBS said the consumer inflation eased in November due to COVID-19 impacts, seasonal factors and a high comparison base.

Meanwhile, China's producer price index, which gauges factory-gate prices, declined by 1.3 percent from a year ago in November, unchanged from the prior month, according to the NBS.

Yang Xin, an analyst at Shanghai-listed Hongta Securities, said the negative PPI growth in November is mainly affected by the falling prices of upstream raw materials, which will help ease pressure on high costs for midstream and downstream enterprises.

Experts said China's inflation is unlikely to become a major policy constraint in China, while many advanced economies have been tightening policies to curb rising prices.

Looking into 2023, Wen said inflation will continue to rise modestly with imported inflationary pressures easing and a pick-up in social demand.

"Inflation should not be a major concern in 2023," said Lu Ting, chief China economist at Nomura.

Lu said both supply and demand could be dented in the early stages, which would result in relatively stable inflation, adding that inflation may pick up slightly due to some release in pent-up demand.

Considering factors including muted inflation, Lu said Beijing is likely to maintain its policy-easing stance in 2023. "Since it will be difficult to keep the current pace of fiscal spending, Beijing may especially need to deliver stable credit growth by extending its momentary easing measures from 2022 to 2023."

Lu's views were echoed by Zhou Maohua, an analyst at China Ever-bright Bank, who said China will be able to meet its annual consumer inflation target of around 3 percent this year, as CPI will likely increase by around 2 percent in 2022.

Citing the latest economic readings, Zhou said the figures point to a bumpy road to economic recovery amid slackening domestic demand and difficulties faced by many industrial and manufacturing enterprises.

Despite the challenges and pressures, Zhou said China's stable price levels give plenty of room to step up macroeconomic policy support for the economy and the country still has sufficient policy tools to prop up the growth.