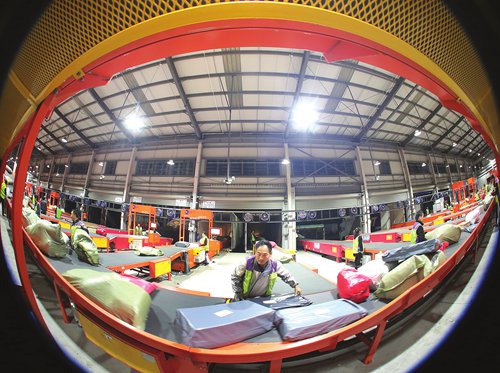 Before the Singles' Day shopping festival, Clayton Boylan in Baltimore of Maryland, the US, had prepared a list of items for the day to take advantage of the big discounts.

November 11 is celebrated by Chinese youth as Singles' Day, though it is also a widespread promotional day throughout China. Tmall.com, an online retailing platform of Alibaba, China's leading e-commerce enterprise, held a promotion day on November 11, 2009, which has become a fixed date for the platform's large-scale promotions.

On Monday morning, Alibaba made a new record by raking in a 10 billion yuan ($1.43 billion) in sales 96 seconds after the shopping festival kicked off, faster than the 125 seconds in 2018.

The latest report by Alibaba on Monday shows that the amount of Chinese manufacturers that participated in this year's Singles' Day festival is five times more than that in 2018, and the variety of goods sold on the platform increased by a factor of 325 compared with last year.

Boylan first joined the Singles' Day shopping frenzy in 2017 to buy Christmas gifts for his family and friends after a friend introduced him to the Chinese online retailing website.

The 21-year-old post-graduate loves cooking and has bought many sorts of kitchenware from knives to electronics from China via the retailing website.

"It has better prices than Amazon and is much more reliable than eBay," Boylan told the Global Times. Boylan prepared a long shopping list for the shopping festival since then.

"I normally have to compile long lists because I get presents for a lot of friends and family," Boylan recalled. "I've spent hours at a time browsing online, looking for the right things."

A report by Alibaba.com, a business-to-business e-commerce platform under Alibaba Group, shows that foreign consumers have a special preference for some "strange" items.

According to the report, sales of weighted blankets to markets abroad have seen a 98 percent year-on-year growth in 2019, despite some doubt over the blanket's stress easing function.

Tan Zhe, a manager of Shaoxing Dotex Textile Co Ltd, a weighted blanket manufacturer based in East China's Zhejiang Province, told the Global Times he received first overseas order for weighted blanket on May from the US, and used an additional 30 percent of manpower to guarantee the order's shipment before the shopping festival.

Tan said more than 90 percent of their foreign orders are from the US, adding that usually, orders for Singles' Day would come in during August and September, 60 to 70 percent more than order numbers in other months.

Alibaba.com has supported more than 8 million foreign small and micro entrepreneurs and more than 1 million online retail dealers, and they are the major group targeted by Alibaba.com during this year's Singles' Day shopping festival.

According to data released by Alibaba.com, Germans are considering buying motorcycles from Southwest China's Chongqing Municipality, and African countries have a high demand for excavators made in Changsha in Central China's Hunan Province. Other daily merchandise such as earphones, cell phone holders and foldable electric bicycles are popular among foreign consumers, too.

On November 4, a warm-up promotion day before the Singles' Day shopping festival, Alibaba.com saw a 106 percent year-on-year gross merchandise volume increase, and a 130 percent increase in terms of the number of consumers.

Easy payment also expands the reach of the shopping festival to go abroad, as Alipay, a leading Chinese mobile payment affiliated to Alibaba Group, announced on November 8 that the platform will support consumers in 11 Asian countries including Thailand, Indonesia, and Pakistan to participate in the Singles' Day shopping festival through its subsidiaries, Tmall.com and Alipay, Chinanews.com reported.

Alibaba.com upgraded its payment system, supporting payment via 22 different currencies in 56 countries, while foreign exchange cost dropped from 2 to 3 percent to 1 percent.

Data shows that as of June, Alipay and its nine other platforms tailored for different countries have provided payment services for more than 1.2 billion users across the world.

Boylan told the Global Times that one of the most import reasons he prefers Alibaba over Amazon is Alibaba's fast delivery.

"The products I ordered arrived promptly, which I appreciate," said Boylan, adding that "I've had orders from Amazon that didn't arrive until two weeks after they were due."

In terms of delivery, Alibaba.com introduced a compensation campaign during this year's double 11 shopping festival for delayed package delivery.

According to a document Alibaba.com sent to the Global Times, the company promises the package to be received within three to five workdays under the support of its special routes of general cargo heading to 23 countries across the world, and the delayed packages will result in consumer compensation.

The general cargo special routes were launched for its sellers to deliver general cargo transportation. The company has set warehouses in such cities as Shanghai, Yiwu of East China's Zhejiang Province and Qingdao, a coastal city of East China's Shandong Province. The special routes allow goods to be delivered globally within two to five workdays.

Cainiao, a logistic unit of Alibaba, took a pledge to guarantee package delivery during the shopping frenzy in a fast and high-quality manner. The slogan "Together, we can create another new record of global logistic" has been printed on airplanes, ships, trains, cargos, warehouses and package lockers across countries in China, Japan, South Korea, Australia, New Zealand and many countries in Europe, North America and Southeast Asia, according to a report by China News Agency on Saturday.

According to the report, in Warsaw, capital of Poland, Cainiao's cooperation partner InPost, decorated the city's longest package locker with the new Singles' Day stickers. Cainiao has established a package locker network in many European countries through cooperation with its logistical partners in these countries.

Warehouses in California and New Jersey in the US host goods to be delivered across North America, as do warehouses in Osaka, Japan for Japanese consumers.

Additionally, more than 100 chartered flights will commute between China and Russia, and China-Europe freight trains will also provide stable cross-border cargo delivery during the shopping festival.

Cainiao has developed cooperation in tandem with the world's top logistics enterprises and established a package network covering more than 200 countries. More than 1,000 cargo airplanes and 10,000 vessels are ready to depart in order to guarantee customer satisfaction around the world in the Singles' Day shopping festival.

Alibaba's foreign consumers are attracted by low prices but worried about buying fake goods, hundreds of questions on Quora.com have raised concerns with Alibaba regarding fake goods.

The Chinese e-commerce giant is busy solving the issue and claimed that just over one in every 10,000 orders on Alibaba's Taobao marketplace in 2018 involved suspected fake goods, said the Strait Times.

Lazada, a spin-off Taobao's Tmall in Southeast Asian countries, said it is working with consumer brands to sell branded goods and prevent the sale of counterfeit goods, the Drum reported on Sunday.