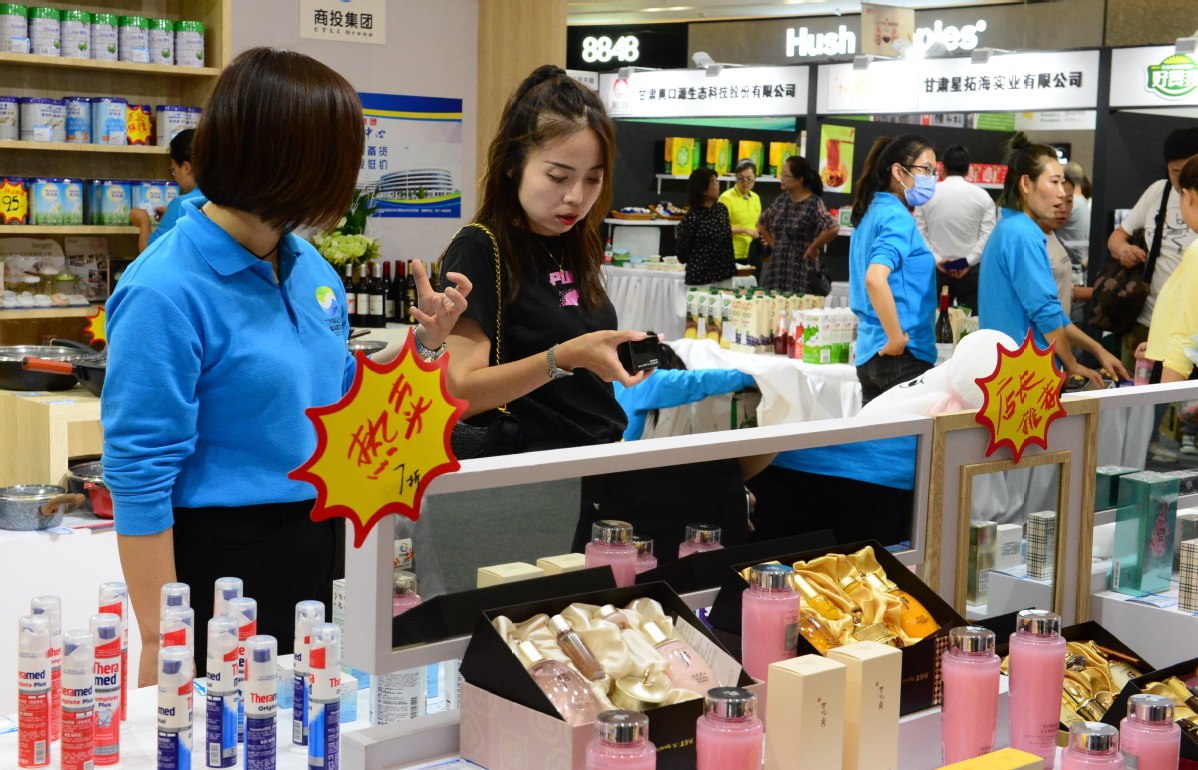 A shopper looks at cosmetics during a sales promotion in Lanzhou, Gansu province. (Photo: China Daily)

The monthlong campaign launched by the Ministry of Commerce to promote consumption will consolidate the recovery in spending, enhance the vitality of market players, stabilize industrial and supply chains and inject new impetus into the Chinese and global economies, experts said.

A total of 179 cities across the country will participate in the event jointly organized by the Ministry of Commerce and China Media Group from Wednesday to Oct 8. There will be more than 2,800 key activities and the events will integrate online and offline commercial activities, involve more than 100,000 companies and 2 million physical and online services and product providers.

A ceremony was held on Tuesday evening at Beijing's Qianmen pedestrian street to officially launch the campaign, during which real-time events for consumption promotion in a dozen cities outside Beijing, including Tianjin, Shanghai and Wuhan, capital of Hubei province, were livestreamed.

Commerce Minister Zhong Shan and other high-ranking officials attended the launch ceremony which also featured exhibitions of products that helped alleviate poverty in 30 counties, time-honored brands from Beijing and Wuhan, and Beijing cuisine. The exhibition will last for a week at the Qianmen pedestrian street.

The Chinese economy has been recovering steadily from the COVID-19 epidemic effect and new impetus is being provided by the dual-cycle development pattern, which means the country's growth will rely on both domestic and international economic developments, with the domestic cycle being the mainstay.

Data from the National Bureau of Statistics showed that though retail sales of consumer goods, a major indicator of consumption growth, dropped by 9.9 percent on a yearly basis to 20.45 trillion yuan ($2.98 trillion) in the first seven months, the figure rose by 0.85 percent on a monthly basis in July.

During the first seven months, online retail sales of physical products increased by 15.7 percent on a yearly basis, 1.4 percentage points higher than the figures for the first six months of the year.

Zhang Jianping, director general of the Center for Regional Economic Cooperation, Chinese Academy of International Trade and Economic Cooperation, which is under the Ministry of Commerce, said since consumption has become an important driving force for the Chinese economy, the campaign is expected to provide new impetus to unleash consumption potential, so as to help ensure operations of market entities, stabilize industrial and supply chains, and secure employment both at home and abroad.

"As the world's second-largest consumption market, China's strong market demand and vigorous consumption activities not only matter to itself but also to the world economy, especially as COVID-19 is yet to be brought under full control at the global level."

Woody Guo, president of Herbalife Nutrition China and senior vice-president of the United States-based Herbalife Nutrition, said the company welcomes the national consumption promotion campaign. Thanks to the growing demand for high-quality health products from Chinese consumers, the US firm has been enjoying steady growth in China despite the COVID-19 epidemic, Guo said.