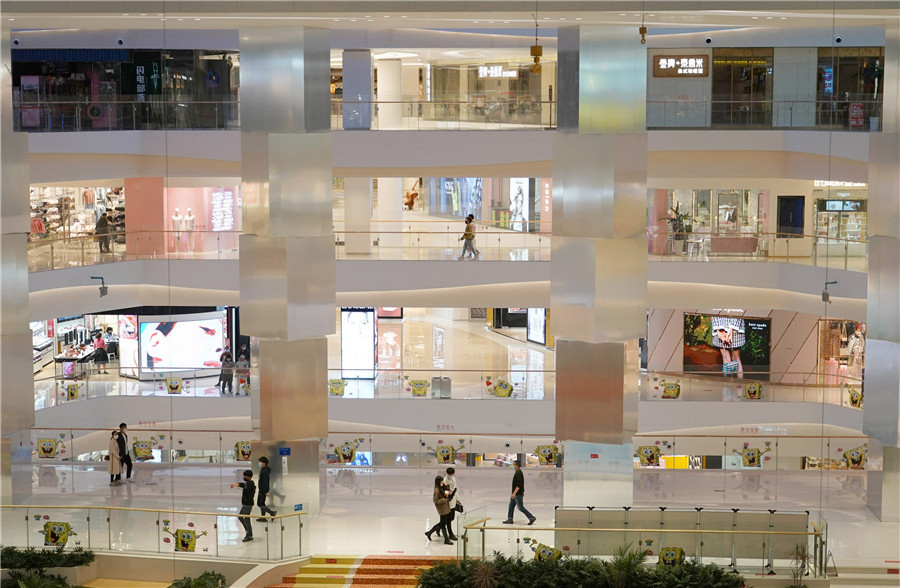 China's consumption sector will shake off the novel coronavirus epidemic impact in the medium or long term, as the country is nurturing new growth engines, senior officials said on Thursday.

The comments come close on the heels of a recent study that said home quarantine has boosted the online shopping habit among more consumers.

Xian Guoyi, director-general of trade in services and commercial services department under the Ministry of Commerce, said the epidemic impact on the consumption sector is short-term and controllable.

Speaking at a news conference on Thursday, Xian said companies' production and people's living orders have gradually returned to normalcy, as the government has introduced several support steps and measures.

"The consumer market is expected to recover steadily. The inelastic demand in some areas has been delayed due to the outbreak, but once the contagion is over, there will be compensatory consumption," Xian said.

According to him, in late February, the average daily sales of key retail enterprises monitored by the ministry climbed 5.6 percent compared to mid-February. In early March, their average sales climbed 0.5 percent compared to the same period last month.

Wei Jianguo, vice-chairman of the China Center for International Economic Exchanges, said the COVID-19 outbreak has been a severe test for the Chinese market, but it won't change the long-term stability and continuous upgrade of the country's consumption sector.

The outbreak's negative impact on the consumption industry may be short-term and such an impact would become more moderate in the long run, he said.

China will facilitate emerging consumption models, represented by online shopping, and will remove institutional barriers for the industry's growth and revive pent-up demand amid the epidemic control efforts, said Ha Zengyou, a senior official with the National Development and Reform Commission.

Emerging and upgraded consumption is expected to unleash new drivers for the economy, Ha said at a recent news conference. For instance, efforts will be made to facilitate the integration of online and offline consumption and upgrade traditional retail and services, he said.

With more consumers urged to stay at home amid the epidemic in China, the "homebody economy" grew rapidly across the country, according to a survey from Nielsen, the global measurement and data analytics company.

Zhao Lingyi, an analyst with Shenwan Hongyuan Securities, said the surging online orders for fresh food were primarily boosted by the fact that consumers prefer contactless services, and the majority of these consumers were aged between 35 and 45 years.

"Such delivery services have high satisfaction ratings among the respondents, while some issues, such as depleted inventories and high prices, have impacted user experiences," Zhao said in a recent research note.