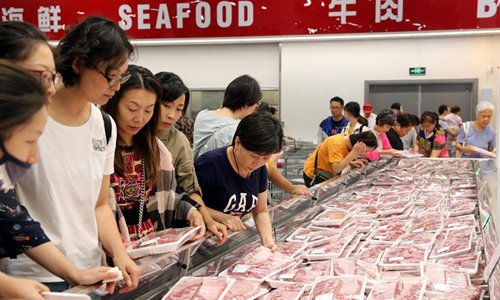 Led by a rise in consumption and services, China reported a stable and steady economic performance in October, with its annual employment target reached ahead of schedule despite mounting downward pressure caused by the trade war to domestic structural reforms and a sluggish global economy.
While recognizing a challenging situation, officials stressed that China has the confidence and conditions to achieve its annual economic target, powered by an ongoing industrial upgrade, a growing consumer market and other policy measures.
In the first 10 months of 2019, retail sales rose 8.1 percent to 33.48 trillion yuan ($4.77 trillion), while the index for services output value rose by 7 percent, according to data released by the National Bureau of Statistics (NBS) on Thursday.
Urban employment rose by 11.93 million people, achieving the annual target of 11 million well in advance of the deadline. The urban unemployment rate dropped 0.1 percentage points from September to 5.1 percent.
Fixed-asset investment rose 5.2 percent year-on-year to 51.09 trillion yuan. In particular, investment in basic infrastructure rose 4.2 percent, while investment in the manufacturing sector was up 2.6 percent and up 10.3 percent in the property sector.
At a press briefing of the State Council Information Office in Beijing on Thursday, NBS spokesperson Liu Aihua said that key indexes of the economy were within a reasonable range in October. "The momentum that China's economy maintains, with overall stability and steady progress, has not changed."
While mentioning downward pressure at least eight times at the press briefing, Liu said that "China has the foundation, the conditions and the confidence to achieve its full-year growth target and maintain stable economic growth," as verified by the nation's booming consumer market, driven by industrial upgrades, and dividends from its commitment to opening up.
She also noted its policy tools to cut taxes and administrative fees, which will "provide a robust underpinning for its economy."
China has set its 2019 economic growth target at a range of 6-6.5 percent.
Liu Xuezhi, a senior economist at the Bank of Communications, told the Global Times on Thursday that a slide in fixed-asset investment in October has dragged down the data for that month and will continue to weigh on the economy in the rest of the year.
"Local governments used up all of their special-purpose bond quotas by the end of the third quarter. Concerns over high local debt would lead to their issuing less bonds in the fourth quarter, a downside for the economy," Liu said.
But on the positive side, the rise in services and retail shows reviving and robust domestic demand that will continue to propel the Chinese economy, Cong Yi, a professor at the Tianjin University of Finance and Economics, told the Global Times on Thursday. It will take time for the government's policies that aim to reduce reliance on infrastructure and property investment to take effect.
China's GDP will expand 6.1 percent for the full year, according to a report released by the National Institute for Finance and Development, a top think tank under the Chinese Academy of Social Sciences, on Wednesday.
Liu stressed that China's economy will not fall off a cliff, but he also urged Chinese policymakers to roll out more counter-cyclical policies next year to cushion against downward pressure.
"There is further room for macroeconomic adjustment. We could expand the financial debt quota and the scale of special-purpose bond issues in order to make fiscal policy more efficient."