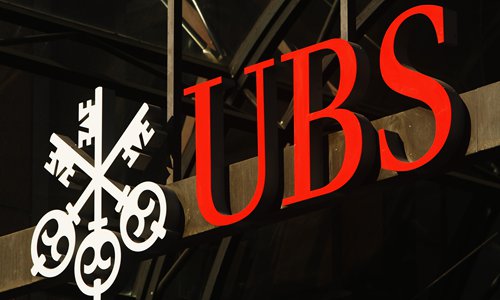 Zurich-based UBS is likely to encounter more setbacks in the Chinese market as its measures involving its chief economist Paul Donovan are not "thorough," analysts told the Global Times on Monday.State-owned China Railway Construction Corp (CRCC), one of the world's largest infrastructure companies, confirmed with the Global Times on Monday that it has decided to stop working with UBS in issuing US dollar-denominated bonds. This happened after Donovan used what some term racist language in a recent report and some linked the two incidents.CRCC did not provide further explanation while UBS said it would have no comment on the CRCC decision."If UBS does not fire Donovan to compensate for his derogatory and racist remarks on China, things could get worse," an industry insider, who asked to remain anonymous, told the Global Times on Monday.Other Chinese enterprises are likely to follow suit after CRCC's move, which will become a tricky issue for the multinational firm, he added.Haitong International Securities, the Hong Kong unit of Chinese brokerage Haitong Securities Co, said it has suspended all collaboration with UBS, Reuters reported on Friday.A Chinese netizen named Yurendashuman said foreign firms need to pay some costs to learn how to respect a country's people and its culture.Donovan, UBS' chief economist, said in a report entitled "Very Normal Inflation" on Thursday that, "Does it matter? It matters if you are a Chinese pig. It matters if you like eating pork in China." The report sparked outrage among Chinese netizens and some economists on Weibo, who said the report used distasteful and racist language to analyze China's inflation. UBS has asked Donovan to take a leave of absence, the company confirmed to the Global Times on Friday. Dong Shaopeng, a veteran analyst who advises the China Securities Regulatory Commission, suggested that companies should stay calm and rational especially amid the ongoing China-US trade war. "China should continue to hold a welcoming and open stance toward foreign capital."UBS has been one of the major beneficiaries of China's reform and opening-up in recent decades. In December 2018, it became the first foreign bank to gain majority control of a securities joint venture in China.