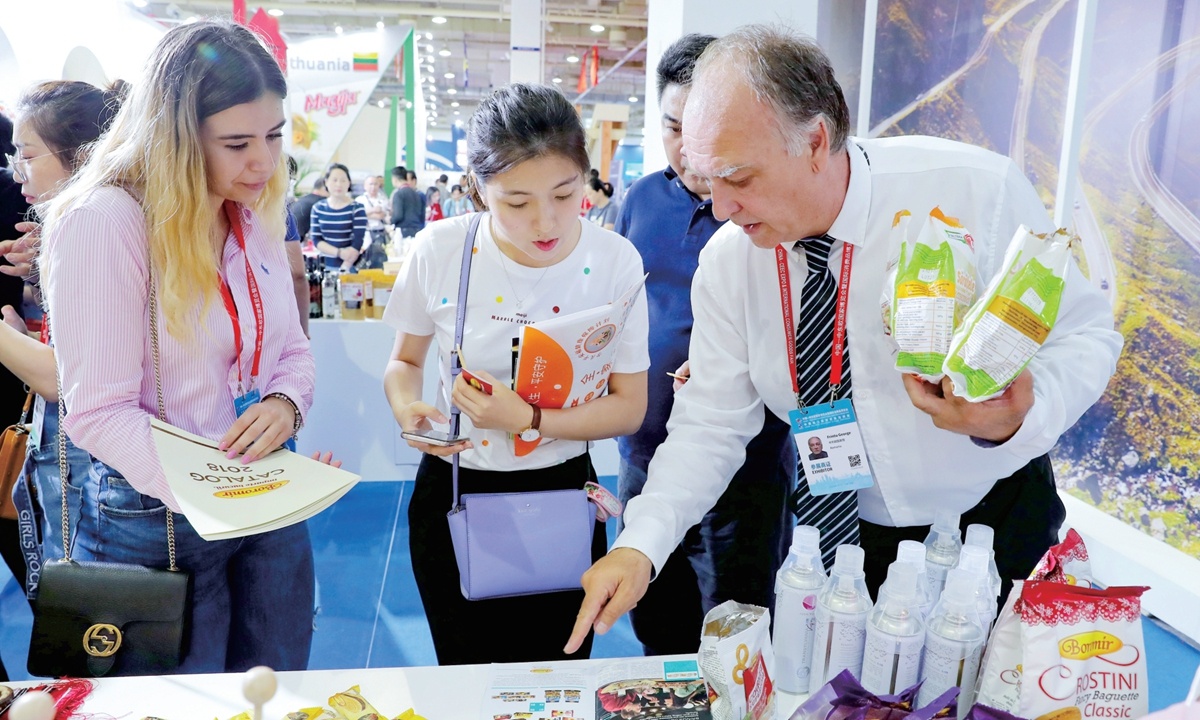 Participants at Hall 5 of the first China-CEEC Expo in 2019 (Photo: Courtesy of the publicity department of Ningbo)

Cooperation between localities and government departments from China and the Central and Eastern European Countries (CEECs) is a vital driver that whill help boost trade, and it is essential in achieving China's proposal to increase imports from the CEECs by purchasing $170 billion worth of goods within five years, officials and experts said at a forum in Ningbo, East China's Zhejiang Province on Wednesday.

Wang Hongliang, counselor of European affairs at China's Ministry of Commerce (MOFCOM), said there is a push to achieve China's proposed goal of importing $170 billion worth of goods from the CEECs in the next five years. Wang commented during the Policy Forum on China-CEEC Local Cooperation, a parallel event hosted by the Chinese Academy of Social Sciences, during the ongoing second China-CEEC Expo & International Consumer Goods Fair in Ningbo.

The target was proposed by China at the China-CEEC Summit in Beijing in February. In addition, China aims to double its agricultural imports from the CEECs in five years and expand agricultural trade by 50 percent during the period.

Those efforts are seen as key to addressing the issue of trade imbalances between China and the CEECs.

To such an end, "we are inviting competent authorities from the CEECs to provide a shortlist of available products and eligible exporters," Wang said at the seminar, noting that accomplishing such a challenging goal requires the support and effort of all parties involved.

China's trade with the CEECs exceeded $100 billion for the first time in 2020, with the average annual growth since 2012 reaching 8 percent each year, MOFCOM data showed. That growth rate far outstripped the growth rate for trade between China and the EU in general, which was 4.9 percent in 2020.

Dragan Pavlicevic, associate professor with Xi'an Jiaotong-Liverpool University, told the Global Times on Wednesday that among other steps, China and the CEECs could work on the expansion of financial support such as loans for companies that wish to enter the Chinese market.

"Also, they could work together on establishing industrial parks in the CEECs, whose products would be consumed in China. This would both support China's economic restructuring and the development of its consumer society, as well as tap into the comparative advantages of (at least some of the CEECs)," Pavlicevic said.

Experts at the meeting highlighted the importance of cooperation at the locality and departmental levels.

Liu Jian, inspector with General Administration of Customs (GAC), said the GAC is working with customs authorities in the CEECs, including Greece and Hungary, on agreements that will eventually result in greater facilitation of trade in goods. Such efforts will help facilitate the process by which Chinese goods enter the CEECs.

Liu said the next step would be cooperating with Poland's customs authority to improve the customs clearance for China-Europe cargo trains.

In 2020, CEEC agri-food products carried by China-Europe cargo trains to China reached $21.51 million, up 158 percent over the previous year.

Liu told the Global Times that there are technical issues to be tackled with foreign peers, and the ultimate result will be the facilitation of the flow of trade.

With the pragmatic support of the CEECs, the China-Europe Land Sea Express Line -- which fast-tracks goods into CEEC destinations via Piraeus Port in Greece -- has developed. Now, more than 10 transportation services with more than 30 freight trains a week run on this route, shortening the delivery cycle by seven to 11 days, according to a statement set by Chinese shipping giant China COSCO Shipping to the Global Times on Wednesday.

Zhao Gang, vice president of Beijing Foreign Studies University, said at the forum that he was surprised that cooperation between entities from China and the CEECs has already extended to lesser-known sectors such as disaster prevention, geology and agri-technologies.

In recent years, China has introduced or was in the process of introducing several types of agricultural produce, such as flax and cucumbers from Poland, yogurt from Bulgaria and Hortobágy goose from Hungary, according to Yu Ge, a research fellow at the Institute of Foreign Economic Cooperation Center of the Ministry of Agriculture and Rural Affairs, who spoke at the forum.