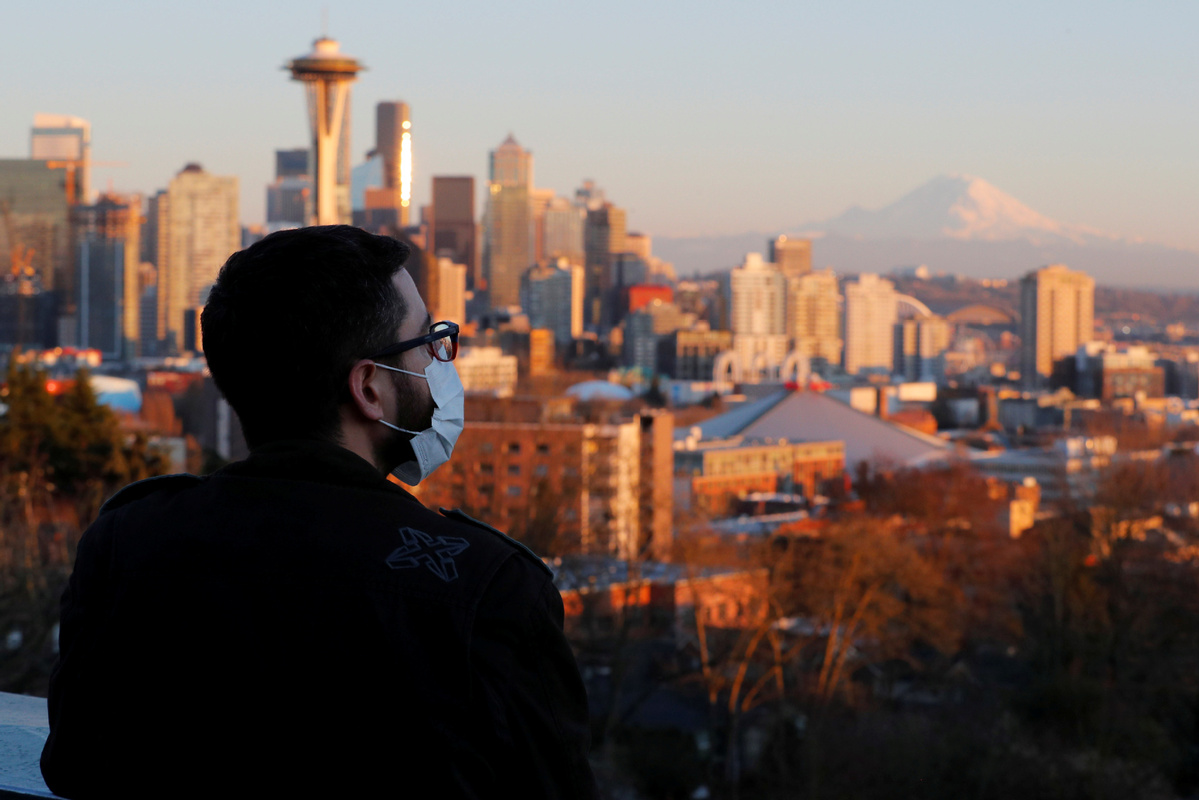 A man wearing a mask, amid the coronavirus (COVID-19) outbreak, looks out from Kerry Park overlooking Seattle, Washington, March 16, 2020. [Photo/Agencies]

The number of confirmed coronavirus cases is still climbing in Seattle and Washington state, and the pandemic has hurt the real estate sector in the area where the first US coronavirus case emerged.

As of late Sunday, the state health department reported a total of 8,384 cases and 372 deaths from COVID-19.

A survey in mid-March by Seattle-based brokerage Redfin found that 38 percent of its city agents had clients who were "concerned" about the coronavirus and were "more reluctant to buy or sell" compared with 16 percent of agents nationwide.

The same survey also showed that 34 percent of Seattle agents had clients who were "hopeful that the coronavirus will make other people reluctant to buy or sell, easing some competition on the market", compared with 13 percent of agents nationwide.

Redfin announced that the unit of its business that buys homes directly from homeowners and resells them to homebuyers would temporarily stop making offers on homes.

"With whole cities shutting down nearly all commerce, no one can say what a fair price is right now, so we're not making any instant offers," CEO Glen Kelman of Redfin said in a statement in March.

The real estate industry in Washington received some relief on March 28, when Governor Jay Inslee modified his statewide stay-at-home order. Now it allows most real estate activity to continue, including in-person showings, provided proper social distance is maintained and no more than two people tour a house at once. But open houses still are not allowed.

A weeklong lobbying campaign by Washington Realtors, a statewide industry group with clout in the state Legislature, sparked the change in Inslee's initial March 23 edict.

In a lobbying pitch to Inslee's office, Nathan Gorton, the group's government affairs director, wrote: "There are about 18,000 (residential property transactions statewide) in progress. A lot of those people, if those transactions don't close, will be homeless."

The Northwest Multiple Listing Service (NWMLS), which coordinates residential property sales across 23 western Washington counties, emailed its 32,000 members to say that "any person who violates the governor's order not only puts himself/herself and his/her family at great personal risk, but also puts the real estate firm and his/her clients at risk".

Even though real estate is now considered an essential business, Becco Zou, a broker at Caliber Real Estate in Bellevue, told China Daily the agency's offices are closed, and agents have been conducting business at a much slower pace and seeing less volume.

"Agents are independent contractors and not paid by their real estate companies,'' Anna Fortune Riley, premier properties director at Windermere Real Estate, told China Daily. "For agents that have not saved, this is a very difficult and scary time."

Holly Yang, senior vice-president at Kidder Mathews in Bellevue, said real estate transaction volume has dropped significantly due to the state's real estate excise tax increase at the beginning of the year, and sales have dropped even more due to the coronavirus crisis.

"Rents have dropped; the vacancy rate, especially in the hospitality sector, has seen a huge increase that will inevitably result in loan defaults if the government does not intervene promptly. With a lot of businesses shutting down, tenants are struggling to pay rent. Without rental income, landlords are facing pressure from lenders. In the immediate term, the pain is severe," Yang told China Daily.

According to two surveys conducted by the National Association of Realtors (NAR) in March, after the first weekend of last month, almost 80 percent of association members said the virus was having no effect on buyer interest.

After March 22, less than half of the respondents said that buyers were carrying on as usual. And that number likely has dropped significantly as state governments have ordered all nonessential workers to stay at home.

Meanwhile, on the sell side in the March 9 survey, only 3 percent of association members said they had seen sellers delist their properties in reaction to the virus. A week later, the figure was 16 percent, and 20 percent in areas where there were presumed or confirmed cases of the virus.

"Housing is essential to our community, and this virus will pass.'' said Yang. "Life will be better again, but we must do what keeps each other safe right now. We know we can ride this out.''