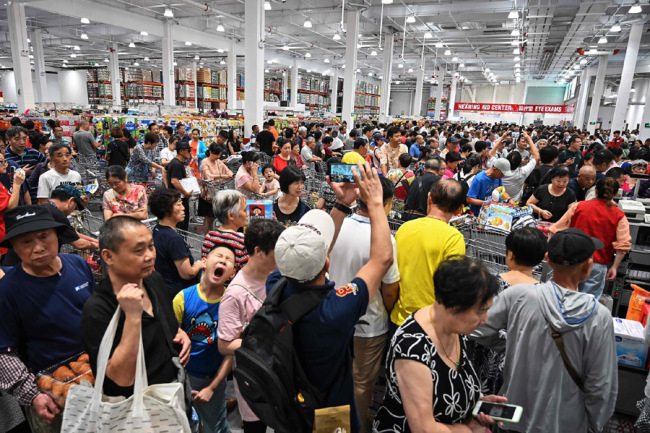 Tens of thousands of consumers flood into the first Costco outlet in China, on the store’s opening day in Shanghai on August 27, 2019. (Photo: VCG)

US based retail giant Costco Wholesale opened its first brick-and-mortar store on the Chinese mainland on Tuesday.

The 14,000-square-meter store is located in southwest Shanghai, with 3,400 stock-keeping units of 60 kinds of goods including household appliances, fresh food, daily necessities and travel accessories.

Customers can enjoy commodities with larger pack volumes and lower prices in the warehouse after paying a membership fee of 299 yuan (about 42 US dollars) a year.

Prices of general merchandise in Costco are 30 to 60 percent lower than market prices and the food sold there is 10 to 20 percent cheaper, according to the retailer.

The store embraced surging customers on its first day, with customers spending up to two hours queuing to check out or waiting three hours to find a spot among the 1,200-space parking lot.

Tens of thousands of Chinese customers have registered memberships since July, which was beyond the store's expectations.

"I will drive to experience the new store with my family next weekend," said Liu Zheng, living in Hangzhou, capital of east China's Zhejiang Province, which is more than 170 km from Shanghai.

On Tuesday afternoon, Costco announced on its official app that its business would be temporarily suspended in the afternoon to provide a better shopping experience. The retailer said customers who were still in the supermarket could continue to check out and the warehouse would not accept new customers until Wednesday.

The mainland market has become mature and more customers can afford higher-quality goods, according to Richard Chang, senior vice president-Asia at Costco Wholesale.

Another retail giant Walmart opened its second Sam's Club warehouse store in Shanghai earlier this year and will continue the store's expansion in China to seize the huge opportunity of the upgraded consumption demand in the country.