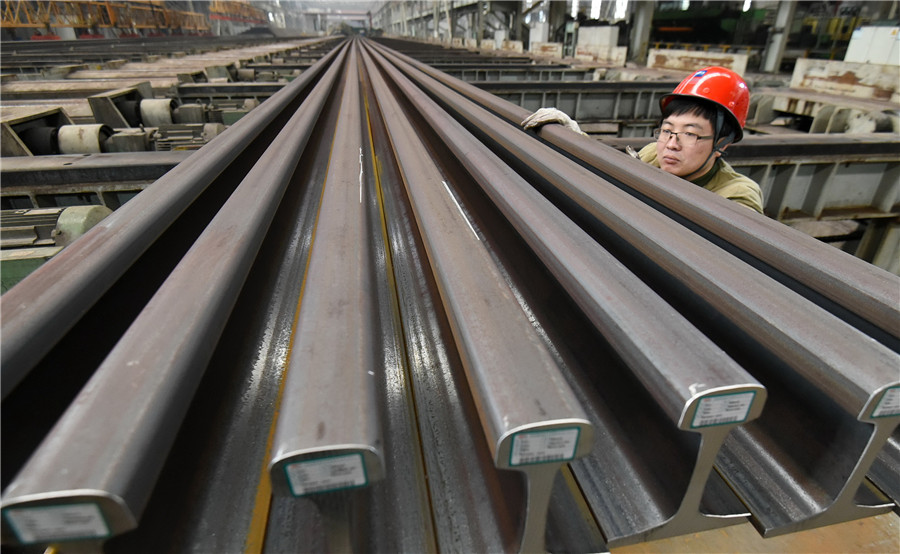 China plans to achieve ultralow emissions at most steel plants by 2025, with 80 percent of raw materials and final products shipped by cleaner methods including railways, ships and pipelines, rather than trucks.

Experts believe the ambitious goal, if reached, will contribute significantly to reducing bad air in the country, as the steel industry currently pollutes more than any other.

Ultralow emissions will be realized at all steel manufacturers in key regions, and in 80 percent of the sector nationwide by the end of 2025, under a guideline published by the Ministry of Ecology and Environment on Sunday. The guideline was drafted by the ministry and four other central government bodies, including the National Development and Reform Commission, the country's economic planner.

The guideline sets different limits for various procedures in steel production. The hourly density of particulate matter in emissions should be below 10 milligrams per cubic meter in all procedures. As for sulfur dioxide and nitric oxide discharges, the limit can differ. The hourly concentration of sulfur dioxide, for example, should be below 35 mg/cu m in emissions generated by core processes, such as pellet roasting, but the standard is relaxed to 50 mg/cu m for other processes.

At least 80 percent of raw materials and products should be transported via railway, ship and pipeline rather than road transportation, the guideline said.

China is the largest steel-maker in the world. The country produced 928 million metric tons of crude steel in 2018, representing 51.3 percent of the world's output, the ministry said.

He Kebin, dean of Tsinghua University's School of Environment, said the steel industry is a major contributor to air pollution, not only during production but also in methods of transport.

The steel sector replaced electrical power generation as the largest source of air pollution in the country in 2017, when it is estimated to have discharged about 2.8 million metric tons of particulate matter, or about 20 percent of the total, he said.

At 4 billion tons annually, steel sector accounts for about 10 percent of China's total volume of goods transportation. Apart from manufacturing, much of the pollution in the steel sector also comes from road transportation, as it relies primarily on highly polluting diesel-powered trucks, he said.

"Emissions from steel enterprises has a marked effect on air quality. None of the top 20 cities for steel output - which are responsible for 51 percent of the country' total capacity - has air quality that meets the national standard. The average density of tiny PM2.5 particulate matter in these cities is 28 percent higher than the national average," said He, who is also an academician of the Chinese Academy of Engineering.

The national standard for PM2.5 density is 35 micrograms per cubic meter.

Emissions will drop dramatically by 2025 - sulfur dioxide (61 percent), nitric oxide (59 percent) and particulate matter (81 percent) - if China can reach the steel industry targets set in the guideline, he added.

He also said the move is expected to help reduce PM2.5 density in the Beijing-Tianjin-Hebei province region (9 percent), the Yangtze River Delta area (8 percent) and the Fenhe-Weihe River Plain area (4 percent) by 2025. Those areas combined account for 55 percent of the country's steel production capacity.

The guideline was released as most of the 39 cities in the Beijing-Tianjin-Hebei region and Fenhe-Weihe River Plain area failed to reach their targets for air pollution control during the most recent heating season, which ran from October to March.

Only four cities, including Beijing, met their targets, while 24 cities saw air quality get worse, the ministry said.

The average PM2.5 density in the combined Beijing-Tianjin-Hebei region during the period, for example, was 82 mcg/cu m, up by 6.5 percent year-on-year, the ministry said.