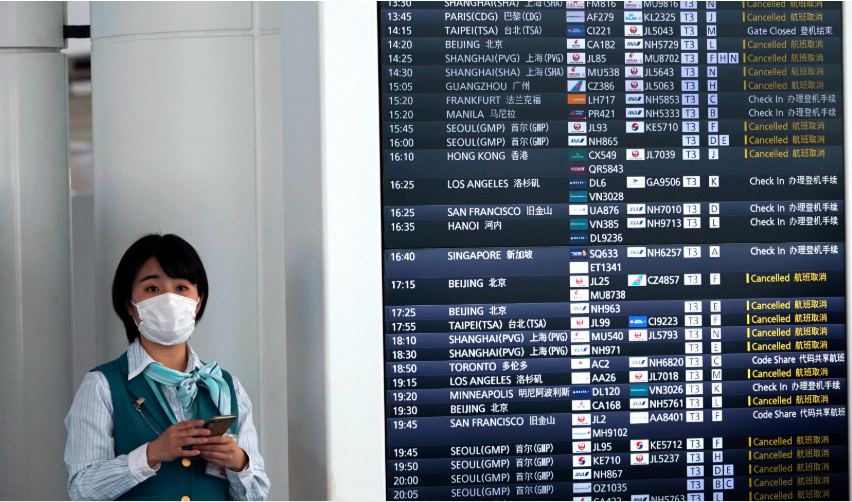 A flight schedule board shows numerous canceled flights due to the coronavirus at Haneda International Airport in Tokyo, March 18, 2020. (Photo: AP)

On March 4, Brian Pearce, chief economist at the International Air Transport Association (IATA), said airlines were in a "crisis zone." On that day, US President Donald Trump hadn't escalated travel restrictions inside the country and to European countries, and the European Union hadn't yet taken the unprecedented and stern decision of shutting down all Schengen Area Borders between 30 countries. These alone serve as an indicator of a deeper crisis in the airline industry, which IATA admitted on a media briefing.

According to IATA's report COVID-19 Airlines' Liquidity Crisis, the situation "has moved beyond the 'extensive spread' scenario implying 113 billion US dollars loss of passenger revenues (19 percent) worldwide in 2020."

Data shows that markets with more than 10 cases represent 94 percent of global passenger revenues at a time when more than 100 countries have implemented travel restrictions, and 185,000 passenger flights have been canceled since January.

"On March 5th we estimated that industry revenues could take a hit of up to 113 billion U.S. dollars as a result of what we thought then would be a worst-case scenario. We could not have foreseen the developments of the last days with massive restrictions on travel being put in place… and with no clear understanding how long they will remain in effect," said Alexandre de Juniac, IATA director general and CEO, at a media briefing on Tuesday.

The association hasn't released a new estimation yet.

The Austria, France, Italy, Germany, Netherlands, Norway, Spain, Switzerland, Sweden and United Kingdom markets are the second most affected group of countries in terms of revenues, registering a decrease of 24 percent in passengers and 37.3 billion US dollars in passenger losses.

For Canada and the US, IATA estimates a reduction of 10 percent in passengers and 21.1 billion U.S. dollars.

Airline companies face a liquidity crisis due to worldwide cancellations. IATA economics added that 75 percent of the airlines have less than three months of cash to cover costs, and they "are fast running out of cash." Additionally, besides the top 30 airlines, other companies have high levels of debt and fixed obligations to repay, putting them in a risky situation.

A recent report by Centre for Aviation (CAPA) stated that by May most of the "airlines in the world will be bankrupt."

Noting that wavering on slots and reducing charges that airlines face at airports can be helpful, the director-general stressed that they won't save the industry from financial peril.

For that, he requested direct financial support as compensation for reduced revenues; loans, loan guarantees, and support for the corporate bond market to airlines or banks reluctant to extend credit; and tax relief.

Juniac said that prioritizing air transport in terms of financial support means to position the world for an eventual recovery since maintaining connectivity is crucial.

"In normal times, airlines transport about 35 percent of global trade. And every job in air transport supports another 24 in the travel and tourism value chain – nearly 70 million jobs," he said.

When questioned about possible job losses due to the crisis, Brian Pearce said it is "very severe," Indian news website Business Line reported.