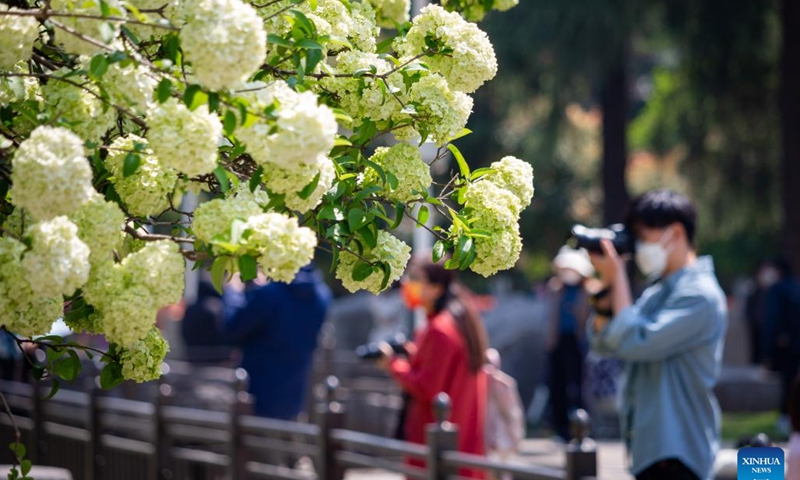 During the Qingming Festival, the domestic tourism industry has been weighed down by a resurgence of COVID-19 cases in many places across the country as many avoided long-distance travel. But short trips and livestreaming tourism gained popularity, and bookings in places that have reined in the epidemic saw a strong rebound, according to reports from major travel agencies.

Economists said that the tourism and catering industries might register a period of contraction, and economic growth is likely to have slowed in March due to the latest outbreaks of the COVID-19.

A total of 75.42 million domestic trips were made over the Qingming Festival, down 26.2 percent year-on-year, or 68 percent of the 2019 level, official data showed on Tuesday.

During the three-day holiday, which ended on Tuesday, reports by tourism agencies pointed to a continued preference for local tourism and livestream activities, a virtual replica for tourists confined at home, and a recovery in some places where the epidemic eased.

According to a report by China's online travel booking platform Ctrip shared with the Global Times on Tuesday, short trips within provinces or to the outskirts of cities gained momentum, with getaways to appreciate flowers, camp in parks and play outdoor sports becoming popular with visitors.

Ticket orders for local and nearby scenic spots accounted for 88 percent of total ticket orders during the festival on the Crip platform.

Data from Mafengwo sent to the Global Times also showed that local tourism and short-distance trips led bookings, with 64 percent of travelers opting to spend one or two days camping, biking or hiking near the city during the festival.

A consumer surnamed Ruan in Hangzhou, East China's Zhejiang Province said that she took a short journey to Longjing village, a suburb of Hangzhou, where anti-epidemic measures are still in place.

"We needed to show a green health code to enter scenic spots. There were a number of tourists but we all wore masks and obeyed orders," Ruan told the Global Times on Tuesday.

In addition, travel agencies are also exploring livestreaming tourism, which is expected to unleash future consumption potential and prepare tourists for their next travel destination after the epidemic is reined in, Xu Xiaolei, marketing manager at China's CYTS Tours Holding, told the Global Times on Tuesday.

A Shanghai-based tourist surnamed Li told the Global Times that due to the epidemic in the city, she was under quarantine during the holiday and took comfort in browsing tourism livestreams at home.

"I watched some livestreamed tourism shows and traveled virtually to Hainan. I am planning to visit the place after the epidemic has eased," Li told the Global Times on Tuesday.

Meanwhile, Shenzhen, South China's Guangdong Province, and some other places have seen a rebound in tourism, reports showed.

According to Ctrip, bookings from users in Shenzhen rose 718 percent from March 21 to 27 compared with a week earlier, after the city announced the resumption of normal life and work in several districts on March 21.

Shanghai, which is stepping up efforts against one of the worst COVID-19 outbreaks, could also see its local tourism market recover over the May 1 holiday, but in general, the whole industry is still having a hard time due to the pandemic, Xu said.

Total social consumption in Shanghai is expected to drop by around 15 percent in March compared with the previous month, Cong Yi, a professor at the Tianjin University of Finance and Economics, told the Global Times on Tuesday.

The resurgence of the epidemic has a significant impact on cross-province travel, and it is expected to weigh on consumer activities and consumption in the first quarter and the first half of the year, Bo Wenxi, chief economist at wealth management firm IPG China, told the Global Times on Tuesday.

There was an 83.7 percent plunge in rail trips, a 53.2 percent drop in road traffic and an 87 percent fall in flights during the three-day Qingming holiday compared with last year, due to flare-ups of COVID-19 cases in the country, according to China's transport ministry.

China reported a total of 1,173 new confirmed cases and 15,239 asymptomatic cases for Monday.