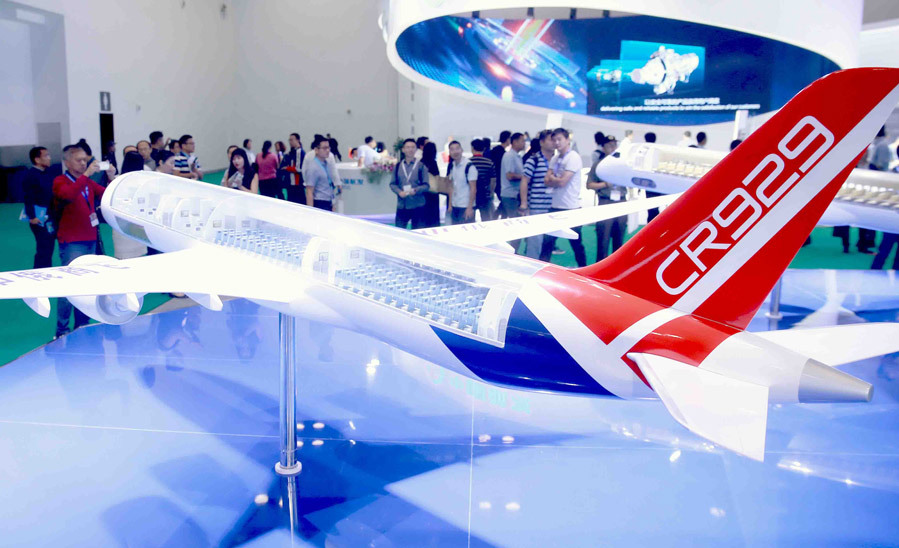 A CR929 jet model is on display at an air show in Beijing. (Photo: China Daily)

Co-developed by China, Russia, project expected to receive 989 orders by 2045

Nearly 1,000 CR929 long-range wide-body jetliners, the largest joint endeavor between China and Russia in the aviation industry, are expected to be sold globally from 2023 to 2045, said a key project leader at Commercial Aircraft Corp of China.

"According to our estimation, the overall global market demand of wide-body jetliners from 2023 to 2045 will be about 10,000, of which 989 orders will be for the CR929," Chen Yingchun, CR929's chief designer at COMAC, said on Wednesday at the Zhejiang Aerospace Industry International Summit 2020 in Hangzhou, Zhejiang province.

"Over the same period, the Chinese mainland will require 818 wide-body passenger aircraft, and we hope the CR929 will make up 270 of the orders."

The designer said that China is now the world's second-largest air transportation market, behind the United States. About 660 million flights were made on the mainland in 2019, with around 28,000 planes taking off from or landing at mainland airports each day.

The nation is expected to become the world's largest air transportation market by 2023, he added.

Once the CR929 enters service, it will be able to operate in 95 percent of China's current air routes, including intercontinental ones like those between Beijing and Los Angeles or Vancouver, according to Chen.

Compared with today's jetliners, the new-generation model will be safer, smarter, eco-friendlier, more economical and more comfortable, he said.

Research and development of the CR929 was launched in 2016. The next year, China-Russia Commercial Aircraft International Corp was established in Shanghai to take responsibility for the endeavor. The project is now in the preliminary design stage and is proceeding well, Chen noted.

The CR929 will be twice the length and width of the C919, COMAC's first jetliner that is now undergoing extensive flight testing, and three times as heavy. The CR929's maximum takeoff weight will be 247.5 metric tons.

With an initial targeted market in China and Russia, the first, standard version of the aircraft-the CR929-600-will be able to fly 12,000 kilometers and carry 280 passengers, according to COMAC.

Based on the standard model, designers will also develop longer variants capable of carrying more passengers for busy routes and shorter versions that can fly farther.

Moreover, they will modify the jetliner into a business jet, a state leaders' jet or cargo aircraft as needed, Chen said.

Speaking of the C919's developments, the designer said that six prototypes are conducting flight tests in China and that his company has received 815 orders for the jet from 28 buyers.

Nearly 260 government officials, researchers, investors and company representatives took part in Wednesday's summit, which was co-hosted by the Hangzhou Investment Promotion Bureau and the Management Committee of the Hangzhou Qiantang New Area.

Yang Fusong, deputy director of the bureau, told China Daily on the sidelines of the summit that Hangzhou is determined to attract and foster high-end manufacturing sectors like the aviation industry.

"Hangzhou has favorable policies, a good atmosphere for innovation, a solid economic foundation and strong digital and information technology industries, which can be directly translated into our advantages in developing the aviation manufacturing industry," he said.

Yang noted that the city intends to support several top-tier enterprises in its Qiantang New Area in their efforts to cooperate with COMAC in the C919 and CR929 projects, and it aims to invite more aviation-related businesses to the new area.