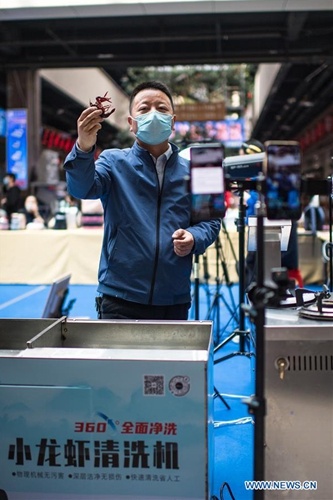 A merchant of the Hankou North Marketplace sells crayfish cleaner via live broadcast in Wuhan, central China's Hubei Province, April 23, 2020. To offset the epidemic impact, the merchants of the marketplace are utilizing the marketplace's e-commerce platforms to promote their products. (Photo: Xinhua)

Crayfish sales in Central China's Hubei Province are rebounding ahead of the five-day May Day holidays, as the provincial economy continues to gain momentum after last year's lockdown.

Crayfish sales have been rising as restaurants across the country are preparing for May Day holidays. The peak trading volume is breaking through around 1,500 to 1,600 tons per day at a crayfish trading center in Qianjiang, the China News Weekly posted on its official Weibo account on Monday.

Crayfish production and sales have been gradually increasing with incomes also up from last year, Hu Junhua, a crayfish farmer at Qianjiang, known as China's crayfish city in Hubei told the Global Times on Monday, adding that the price for one kilogram increased by roughly four to five yuan ($0.62-$0.77) compared with last year.

Zhong Yougao, a crayfish farmer in Jianli county in Hubei also said that the crayfish production and sales have been rising, and that crayfish sales from his base reached around 500 kilograms everyday recently.

As the first province in China hit by the COVID-19 outbreak, Hubei Province's GDP in the first quarter of 2021 skyrocketed 60 percent, recovering from a 40-percent plunge in the same period of 2020, according to official statistics released earlier in April.

Provincial GDP increased 58.3 percent to reach 987.27 billion yuan ($151.4 billion) in the first quarter. The secondary sector expanded 88.9 percent year-on-year, while the services sector grew by 45.7 percent. Primary industry, which didn't grow at all last year, expanded 24.9 percent in the first quarter of this year.