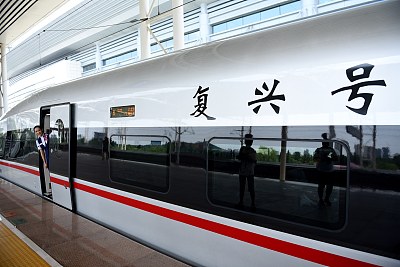 Unlike 2016, when the company required a tax cut to turn a profit, CRC was able to pay 10.65 billion in tax, the cb.com.cn report said.

Zhao Jian, a professor at Beijing Jiaotong University, said CRC had a better year mainly due to an improved performance in the cargo transportation business.

"Railway cargo transport has gotten a boost since the government began tighter scrutiny of overloaded trucks," Zhao told the Global Times on Wednesday.

However, many factors mean the 2017 profit figure won't be matched in the years ahead, noted Zhao.

"The new high-speed railways are mostly located in western parts of the country, which means maintenance costs are likely to rise while ticket revenue may drop due to slack demand. Many electric multiple units will soon need major repairs, as some of them are reaching 10 years of service life, weighing on CRC's performance," Zhao said.

CRC said debt stood at 4.99 trillion yuan as of the end of 2017, with a debt-to-equity ratio of 65.2 percent. The ratio has stayed at about that level since 2015. That is similar to the average of China's centrally administered State-owned enterprises at about 66 percent, according to media reports.

China has been speeding up investment in the railway sector. In 2017, fixed-asset investment in railways reached 801 billion yuan with 3,038 kilometers of new track put into operation.

This year, 732 billion yuan is expected to go into railway infrastructure, with 702 billion yuan allocated for construction. New railways with a length of 4,000 kilometers, including 3,500 kilometers of high-speed lines, are set to start operation.

As of December 31, 2017, China had 25,000 kilometers of high-speed railways and total railway length of 127,000 kilometers, according to information on the website of CRC.